Why are 50 plus women susceptible to anaemia

Dr Sarah Brewer explains why women are at greater risk of developing anaemia in later life and how you can bridge the nutritional gap. 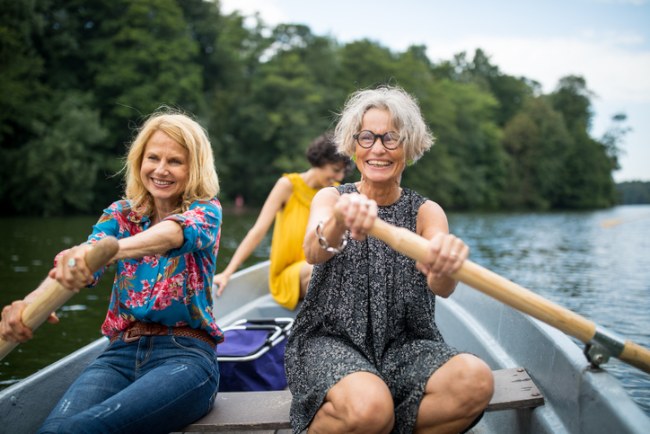 As you age, your metabolism naturally tends to slow (leading to the infamous middle age spread) which might make you think you need less vitamins and minerals. But unfortunately, increasing age also means your ability to absorb key micronutrients decreases so you need more overall.

We all need iron to produce the red blood cell pigment (haemoglobin), which carries oxygen around the body, and the red muscle pigment (myoglobin), which supplies oxygen to our muscles. Iron is also vital for energy production in our cells. If you are cutting back on red meat to follow a more plant-based diet, or to help maintain or lose weight, iron deficiency can slowly creep up on you. Worldwide, iron deficiency is the most common nutritional disease, with most cases going unrecognised.

Up to 27% of people in the NDNS (National Diet and Nutrition Survey) report up to the age of 54 do not have enough iron. Overall, half of women in the UK do not meet their daily iron requirement. Anaemia is the commonest blood abnormality in the older population in the UK and the overall prevalence of anaemia in older people in the UK is 20.1% in (65 – 74 year old) men and 13.7% in women of the same age group.*

One of the main causes of iron deficiency anaemia is sometimes related to diet, but it can also be linked to  gastrointestinal causes such as peptic ulcers, plus could be linked to taking non-steroidal anti-inflammatory drugs known as  NSAID use also those who regularly take aspirin. Other causes could be polyps, inflammatory bowel disease but all cases of anaemia should be investigated.

Why vitamin absorption reduces with age

The main factor that affects nutrient absorption as you get older is reduced production of stomach acid. The stomach lining naturally thins and become less active with age, in a condition known as atrophic gastritis. One study found that 24% of those in their sixties is affected, rising to 32% of those in their seventies, and 40% of those aged 80 and over. Other estimates put the prevalence of atrophic gastritis at around one in five older people.

Because of these changes, vitamin and mineral supplements designed for those aged 50+ tend to contain twice as much B vitamins and other key nutrients as those designed for under 50s. Supplements developed to meet the needs of those aged 70+ will contain even more.

Iron occurs in two forms found in both animals and plant foods.  Haem iron is found in animal foods such as red meat, offal (liver, kidneys, heart), poultry, eggs and seafood such as mussels and canned sardines. Non-haem iron is found naturally in plants foods such as beans, pulses, dark green leafy vegetables, oats, quinoa, tofu and nuts.  Other surprisingly good sources of non-haem iron are dried herbs and spices that can be added to many dishes.  White flour is fortified with iron in the UK as are foods such as breakfast cereals and together these account for a significant proportion of the nation’s intake.   Vegetarians, and those who eat little red meat, are also at increased risk of iron deficiency.

How to increase the absorption of iron from plant foods

If your levels of iron drop below a certain level then you can develop a condition called anaemia, which mostly affects women. The symptoms of iron deficiency are listed below and if you think you may be at risk then the first course of action is to visit your GP who can run a blood test to assess your status.  If your levels are too low, you will be advised to increase your intake of iron-rich foods and take an iron supplement such as Healthspan Iron Care (£6.95 for 120 tablets). Healthspan IronCare is  made from iron bisglycinate, which is gentle on the stomach, preventing some of the side effects associated with traditional iron supplements, such as constipation and nausea. Available, 120 tablets £6.95 http://www.healthspan.co.uk/cardio-care/ironcare/

Dr Sarah Brewer is a medically-qualified nutritionist, and Medical Director of Healthspan.

*British Committee for Standard in Haematology

** Study by Dr Bernard Favrat, of the University of Lausanne, Switzerland, said: 'We found that iron supplementation for 12 weeks decreased fatigue by almost 50 per cent from baseline, a significant difference of 19 per cent compared with placebo, in menstruating iron-deficient nonanaemic women with unexplained fatigue and ferritin levels below 50g/L.

Taking supplements for 12 weeks reduced fatigue by almost a half in women who had low levels but were not deficient.