Explore the east coast of Scotland on this walk from Crail to St Andrews.

Distance: 12 miles
The Fife Coastal Path stretches from North Queensferry in the south stretching for 150 kms to the Tay Bridge in the north.

Each corner holds another secret to discover, historic castles and caves, quaint fishing villages and award winning beaches. With rugged cliffs, long sandy beaches, internationally important estuaries and wildlife reserves, walking the Fife Coastal Path is an experience not to be missed!

The coastal centre, located in the basement of the three storey Harbourmaster’s House building is designed to encourage people to explore the many features of the Fife Coastal Path. The displays within the coastal centre also show some of the history of the region. It also showcases the links with our North Sea neighbours as well as offering everyone the chance to learn about the trade routes via our interactive North Sea Trading Game. 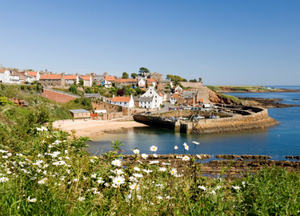 Crail is the oldest of the East Neuk burghs, becoming a royal burgh in the 12th century and developing around the harbour and its 12th century castle.

Evidence that Crail has been a settlement from very early times has been found in the remains of prehistoric burials found in the vicinity. These early days of Christian civilisation, associated with the Celtic Church from the fifth to eleventh centuries, are symbolised in the Sauchope Stone in the burgh’s Victoria Park.

Trade in salted fish and agricultural produce with Europe made all these communities among the richest in Scotland. Today, fishing boats still operate from Crail’s picturesque harbour.

Crails’ Harbour and streets of 17th and 18th century houses attract many artists and photographers. Look out for some of the traditional features of the East Neuk houses, including the forestairs (outside stairs) and crow (corbie)-stepped gables. Many of the houses also have marriage lintels above their doors or built into walls which show the initials of the first owners and the date of the building or their wedding.

For centuries, the community life of Crail centred around the Kirk, Tolbooth and the Harbour. The streets which connect these buildings are picturesque and full of character, and it is well worth exploring the many fascinating buildings which are part of this ancient burgh’s history.

The Blue Stane (stone) lies beside the church gate. According to local legend, it was thrown from the Isle of May by the Devil to damage Crail church. The stone split in mid-air, one piece landing here and the other landing on Balcomie Beach near Fife Ness, the most easterly point of Fife. Behind the church is a 19th century morthouse, where bodies awaiting burial were locked away for several weeks to deter body snatchers who sold them to University anatomists.

The path starts in Crail and passes the coastguard station, a WW11 gun emplacement and bird hide then joins a narrow road, past caravans and the remains of a harbour. A circular rock template was used as a guide for building a lighthouse tower.

A sandy, narrow path follows the boundary of the golf course, the seventh oldest in the world, and passes Constantine's Cave where the king was killed c 874. Beyond the golf course the route continues along the shore beneath the Randerston cliffs. Walkers should wait for low tide before attempting this section. The path leads to a bridge over Cambo Burn then continues along a sandy track through the dunes.

An alternative route follows Kingsbarns beach. The section of path from Kingsbarns to Boarhills is rough and may be muddy in winter. The track borders Kingsbarns Golf Links, crosses a stone wall and onto a much narrower path. From here the route hugs the coastal slope between rocky shore and farmland and descends to the beach and continues to Babbet Ness. The path crosses Kenly Burn near Burnside farm and follows farm tracks to Boarhills, skirting the edge of the village before heading back down to the coast.

The section from Boarhills to St Andrews may be the roughest section of the whole route and should be walked at low tide. Buddo Rock is a prominent feature, an impressive stack of pink sandstone seen en route to Kittocks Den and the St Andrews Bay golf course. Another prominent feature, The Rock and Spindle, is the weathered remains of a volcanic plug. The base features a circle of basalt rays. The path leaves the beach and climbs a flight of steps to Kinkell Ness and the Kinkell Braes Caravan Park then descends to the West Sands Blue Flag beach. 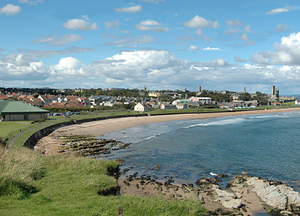 St Andrews has a unique place in Scotland's heritage. It takes its name from one of Christ’s apostles whose relics, legend tells, St Rule brought to this place. The town was an important religious centre in medieval Scotland and the bishops wielded great influence over church and state. Its priory was a centre of learning; Scotland's first university was established here.

St Andrews was, and still is, a rich, bustling market town and many features of that time remain in the pattern of streets and wynds, and in the character of the houses and historic sites. One of the many attractions of the town today is the range of its shops and stores which offer both essentials and luxuries.

For further information on walking the Fife Coastal Route log on to www.visitscotland.com/walking or www.fifecoastalpath.co.uk.

You can also order your copy of a guide that gives detailed information and route maps for 54 great walks, information on long distance routes, walking events and festivals, accommodation and outdoor access. The dedicated VisitScotland walking web site includes more than 900 walking routes, 59 walking operators and the walkers welcome scheme has 1300 members across Scotland.