The coast to coast National Trail that takes in city and country as well as Roman ruins. 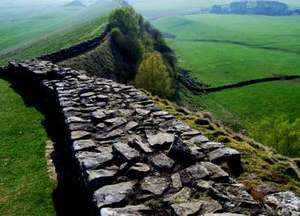 The Hadrian's Wall Path stretches 84 miles between Bowness-on-Solway in the west to the aptly named Wallsend on the east coast. Those undertaking the trail will go through Newcastle along the river, as well as the green fields and more rugged scenery of the Northumbrian and Cumbrian countryside.

An experienced walker who wants to do the whole National Trail and see some of the sights could complete the entire path in a week, less confident walkers would need longer. An alternative is to explore just one section of the trail, or spend a weekend walking. The walk is not challenging like climbing, but some stretches are hilly with very steep bits. There is a new separate Hadrian's Wall Cycleway too for those who prefer wheels to walking boots.

From the West the trail begins at Segedunum Roman Fort, before taking you through Tyneside and its shipyards. Then comes farmland, where you will not see much wall but you will notice ditches and ridges at either side of the road - in fact the B6318 is the wall, or rather on top of it, because its stones were used as foundations to build the road. The scenery will become wilder and the views more expansive, as you reach Whin Sill. You may see Scotland and the Pennines. After Hare Hill there is no more wall, only ditches and bumps. Then the path becomes less hilly and exposed, with more woodland. Bird watchers will enjoy this final section. The Solway estuary marshes are affected by tidal flooding, so if you plan to walk there check times for that day on the noticeboards or on the internet at www.ukho.gov.uk before you set out.

If you pick up a Hadrian's Wall Path Passport and collect six stamps at the stamping stations, between May and October, when you've done the whole walk you can obtain a completion certificate and badge for £2.95 at either Segedunum in Wallsend or The King's Arms pub in Bowness-on-Solway.

You can explore the Roman Empire's northernmost defences on the central part of the path which contains the majority of stretches of wall that visitors can still see today. In addition to Roman turrets, mile castles, forts and barracks, there are also the remains of homes, temples, bathhouses, granaries and cooking areas. At Corbridge there is a fountain house with an aqueduct, and you can even see some of the earliest known flushing toilets and a hospital at Housesteads fort, the best preserved wall outpost, on Whin Sill escarpment, where you will also find Walltown Craggs, where the wall follows the hills up and down like a rollercoaster. For another good view, Winshields Wall is the highest point of the trail.

To learn about life in Hadrian's time, try the museums at Housesteads, Corbridge, Segedunum, Vindolanda, the Roman Army Museum near Greenhead, or Chesters fort which features the remains of a bridge that continued the wall over the Tyne. As well as Roman workshops and a drill hall Birdoswald features later fortified buildings. There is a visitor centre, and accommodation in a farmhouse within the fort's walls. Some of the sites include tearooms and shops, and in addition to the Roman attractions - which you can search for on their websites - English Heritage and the National Trust have several castles and medieval religious buildings.

Once Brewed is the main visitor centre where you can find tourist information on Hadrian's Wall and Northumberland National Park, there is a youth hostel too, and Twice Brewed pub is nearby. There are also youth hostels in Newcastle, Carlisle and Ninebanks. In addition to youth hostels there are some campsites if you want to stay close to the path and keep costs down, B&Bs, farms and inns where you can relax in comfort, or 4 star hotels if you fancy somewhere more luxurious after a day on your feet. It is best to book accommodation ahead, especially during high season between June and September, otherwise you risk arriving after a hard day's walking and being turned away.

A bus service, AD122, operates daily from Easter to the end of British Summer Time in October, and connects the trail to towns and villages. For sustenance while walking, in villages off the route you can find pubs and hotel restaurants for a bar snack, and cafés, many of which offer a takeaway service that you can order in advance. Check facilities and opening times online before you go.

Various operators offer walking holidays along the trail, whether you want to be part of a guided group or follow notes independently. A list can be found on the Hadrian's Wall National Trail website. If you just want a company to transport your baggage ahead each day, Walkers' Baggage Transfer Company or Sherpa Van will do this for around £5-6 per bag per day. When packing it is vital to check the forecast and prepare for the conditions, remember plenty of suncream or wet weather gear because the wall is often located in exposed landscapes.

Listings of accommodation, refreshments, water taps, cash machines and sights plus further details about Hadrian's Wall and the National Trail can be found at nationaltrail.co.uk/hadrianswall and www.hadrians-wall.org.