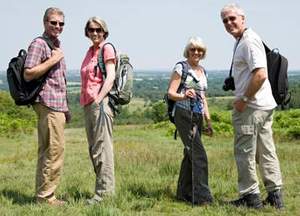 I’m standing on a Sussex station platform waiting for my train and it’s 4.50 a.m. I’ve had a busy week at work and it’s Saturday. I’ve left a long-suffering family behind at home and I don’t expect to reach my day’s objective for a good six and a half hours. 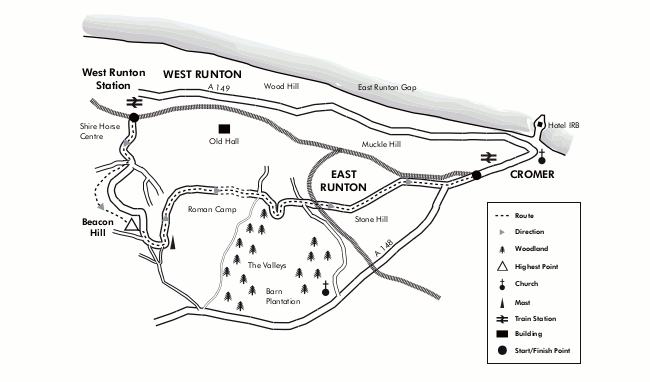 Put it this way: you needn’t blow the dust off your crampons or visit your doctor for altitude sickness pills before embarking on this one. This is the lowest county high point in the book and gives itself up with very little struggle. Not that I was complaining hugely, having spent most of the previous seven hours on the train, and very aware I’d be spending most of the following seven hours on the train as well; hoping that, unlike on the way up, the seat which had been allocated to me somewhere in cyberspace was not two seats away from someone with an intrusively loud iPod, while every other carriage was quieter than a Trappist monastery during an outbreak of laryngitis.

Starting from West Runton station, join the road crossing the railway line immediately to the west of the station and follow the road inland. The road kinks to the right, then to the left, and very soon reaches a junction, with Calves Well Lane going off to the right. Turn right into Calves Well Lane, taking care not to be sidetracked along Renwick Park East; Calves Well Lane is the track heading off at rightangles to the road. As the lane shortly veers very sharply right, you continue straight on uphill along a narrow sandy track. You’ve now entered the wooded area known as West Runton Heath, which is home to an extensive variety of birds, including the green and great spotted woodpecker, great tit, blue tit, coal tit, robin and wren. You may also see butterfl ies such as green hairstreak, speckled wood, red admiral, grayling and gatekeeper, and you should look out too for adders, common lizards and slow-worms.

Shortly, you reach a junction of paths with a pictorial sign indicating no cycling or horses; turn left here and proceed on a clear undulating path, keeping the houses to the left and good views to the sea beyond. You drop down to a further ‘no cycling/horses’ sign and reach a wooden post with arrows indicating Route 16 straight ahead, and Route 1 to the right. Immediately before this wooden post, turn right onto a path which goes uphill through the trees, quite steeply in one or two places, and arrives at a grassy clearing with a fl agpole in the middle. The fl agpole marks the summit of Norfolk. My GPS device suggested a height of around 355 feet compared with the ‘offi cial’ height of 345 feet; whatever it is, it’s not going to have you reaching desperately for your oxygen mask.

From the flagpole, go on across the grass to a driveway and turn left onto it, you are now on the Peddars Way & Norfolk Coast Path National Trail, which you will remain on for the rest of your walk. This is one of the easier National Trails, wending its way for just over 90 miles from Knettishall near Thetford to end its journey at Cromer, as you will be doing. Go forward to a junction with a road, crossing straight over and almost immediately bearing left as signed along a track through the woods, downhill. This is also an approach road for a large campsite, so don’t be surprised to share the road with a posse of cars and camper vans. Just to the right of the entrance to the campsite, carry on along an obvious path which enters open country. You reach an area of rough grass, on the other side of which is a crossing track, which you go straight over – the signpost is concealed here and you won’t see it until the last minute – and continue along Cross Lane. You soon negotiate a sharp lefthand bend, then a sharp right-hand bend, going forward to cross a metalled road and pass under a brick-arched railway bridge. Beyond it, you follow a clear track eastwards, veering north-eastwards and going forward to reach another metalled road. Bear right onto this road and arrive at a busier road, turning left here to follow it to Cromer station which is on the left. If you wish to visit the centre of Cromer, just carry on down the road.

Cromer has been a popular resort since the end of the 19th century when the railway arrived; its church tower at 160 feet (49 metres) is the highest parish church tower in Norfolk. During World War Two it was a front-line lifeboat station which saw 450 people rescued, and Henry Blogg, Britain’s best-known and much decorated life boat man, was the coxswain here for more than 50 years. Fishing continues as it did before the arrival of the tourists, and Cromer is particularly famous for its crabs; the fi rst edition of the offi cial Ordnance Survey guide to the Peddars Way & Norfolk Coast Path suggested that the conquest of the route might be celebrated with a crab sandwich. Being short on time before the start of my seven-hour return journey, my more modest 3½-mile walk had to be celebrated with two bananas from the self-checkout at Morrisons next to the station, costing me 38p. And paid for – having pressed one button too many by mistake – by debit card.

You can find more walks like this in my book Walking the County High Points of England. You'll get maps, routes, refreshment stops on walks as varied as Dark Peak on the Pennine Way in Derbyshire to the misty Malverns in Worcestershire and Milk Hill on the Mid-Wilts Way, the book encapsulates my love of the English countryside.