Helicopter Money on the way?

Following last week’s column on quantitative uneasing or ‘quantitative tightening’, Peter McGahan questions how deeply this might impact your pensions and investments. 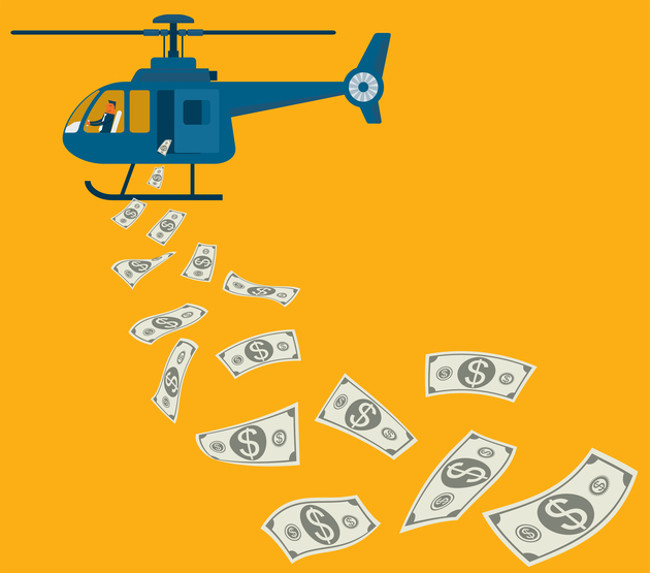 Experts appear to be very much at odds with each other as to how much impact there will be on stock markets.

There will undoubtedly be a lag for this tightening to take effect and it will be some time from now that markets will react (eighteen months if you look at China’s programme, and that’s if you believe the quantitative tightening caused that downturn).

From all my studies on the size of a central bank’s balance sheet on markets over long periods, it is clear that markets appear to be reasonably ambivalent to it.

That is a history covering long periods of time back as far as the 1700s, but this time, undoubtedly, stock markets have benefitted from central banks inflating equities as and when they had the ‘extra cash’.

Comparing these historic periods, however, is like comparing the performance of one football team against another over their last 50 games - Pointless.

Central banks have come under criticism for supporting the housing market and equities with their interference with Quantitative Easing (QE), so it seems very strange to me that the selling of assets aren’t expected to create a downward pressure on the same assets they have inflated upwards – what goes up must come down.

Further criticism has been levied on them for increasing interest rates at the same time as they are reducing their balance sheets.

Selling the bonds back would normally increase interest rates and of course reduce the supply of money, which will devastate the housing market, but the belief on the upside is that simply allowing the bonds they have to mature, will slowly reduce their assets without having this effect.

If you wished to be cynical, you could follow the money and easily believe the whole programme was nothing more than a plan to recapitalise banks, who simply left their reserves within the Federal Reserve, and were paid $12 billion in interest in 2016. (1)

This might explain why QE is believed not to have worked as the capital never made its way into spending, instead, being used to create extra bank liquidity.

One of the greater risks on exit of QE is that of currency wars which occurred on the way into QE, and naturally, you might expect, will have the same effect on the way out.

Whilst the US has begun its programme of tightening, Europe has not, and is not in a position to.

The UK is a long way away as it has no idea what its current economic situation is now, or is likely to be, in light of the impending Brexit.

And so, currencies around the world will begin their volatile battle and markets will respond with similar volatility. Opportunities as well as risk.

We know that $34 trillion of global QE has produced little growth and has overinflated equity and property prices. (2). The reversal of this would suggest it will pay to be vigilant if downside risk is something you cannot deal with.

A matter not considered by the optimists is what happens if there is a recession. Central banks have nowhere to go currently with interest rates as they are at records lows, so the only option is to return to QE of some sort.

We already know it hasn’t worked, so the panic through what would be seen as desperate would easily be taken advantage of by those who make money out of panic.

Perhaps the only option left in such a peculiar liquidity trap is to introduce helicopter money (another form of QE) – giving money directly to the people rather than through the banks that have complete control of it – the banks who caused the problem in the first place.

Another alternative is to drop the rate the banks are receiving on their excess reserves at the Federal Reserve, which will force the money into the market and economy.