Dogs and cats in harmony

It is widely assumed that dogs and cats are natural enemies. However, if introduced early in life your cat and dog can learn to accept each other, and with luck will become the best of friends. 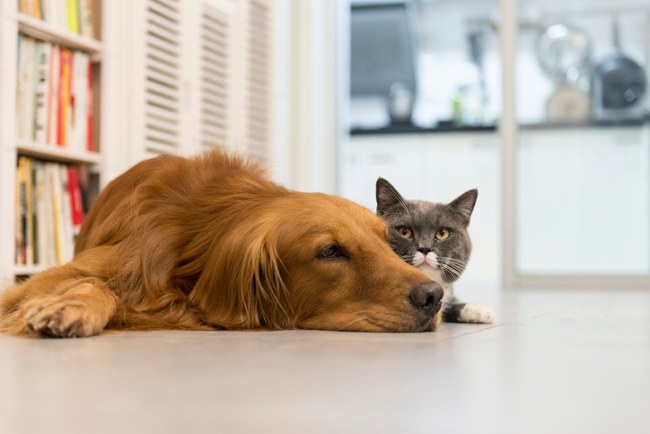 It is widely assumed that dogs and cats are natural enemies.  This isn't strictly true.  Before dogs were domesticated they had to hunt smaller animals to survive and that instinct remains, giving them a natural urge to chase small fast-moving objects.  Cats, of course, don't appreciate this behaviour and when pounced upon by a dog the flight or fight impetus takes over.  If the cat can get away it will; if it is cornered and can see no escape route it will hiss and scratch and the dog is likely to end up running off with its tail between its legs and a bloody nose.

There are steps that can be taken to ensure that harmony reigns in the household and the key is to take them early, as soon as a new animal is brought into the home.

When first introducing dog and cat, keep the dog on a lead in order to maintain control over the meeting.  Try to ensure that there is a high position available to the cat to escape to, (cats naturally climb to avoid danger).

Talk to both animals constantly in a calm and reassuring way, using their names often.  You are the leader of the pack and if you're content and free from anxiety, your pets are more likely to relax. If an animal senses that you are tense, it will suspect danger.

If you are introducing a puppy into the house, it's a good idea to take it to obedience classes.  If a dog responds to the commands 'leave', 'sit' and so on, you will have greater control over play times should the dog becomes a little too rough with the cat.  In any event, a well-trained dog will make your life easier and will be happier and more secure in itself. 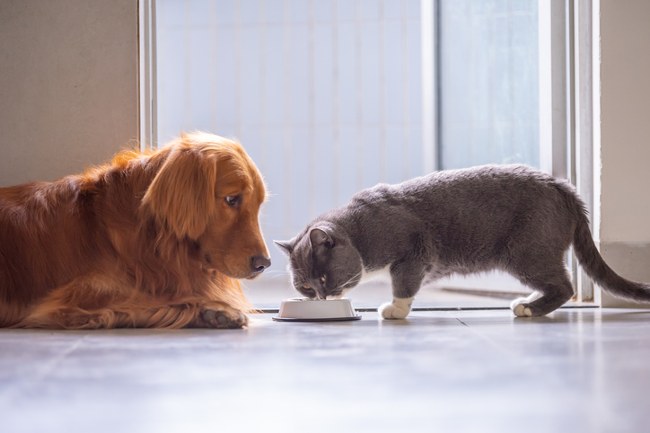 Try to establish separate feeding areas for the animals, at either end of the kitchen perhaps, or if possible, feed the cat in a place that is not accessible to the dog.  Feeding time is a potential flashpoint, and some dogs are inordinately fond of cat food.  Most animals become very bad tempered if they feel their meal is under siege from another.

Allocate periods of play time where, under your supervision, your pets can be encouraged to interact and praise them wholeheartedly when they play well together.  Don't force either one into this, however, and always leave that all important escape route open. Don't be too disappointed if they never actively play together.  The important thing is that they accept and respect each other.

Spend quiet times with both animals, perhaps sitting with one either side of you, talking to them softly and stroking them simultaneously.   This will help to avoid jealousy and encourage acceptance of each other as being no threat. If they both fall asleep, this is a good sign that they have come to terms with each other and feel unthreatened in the other's presence. 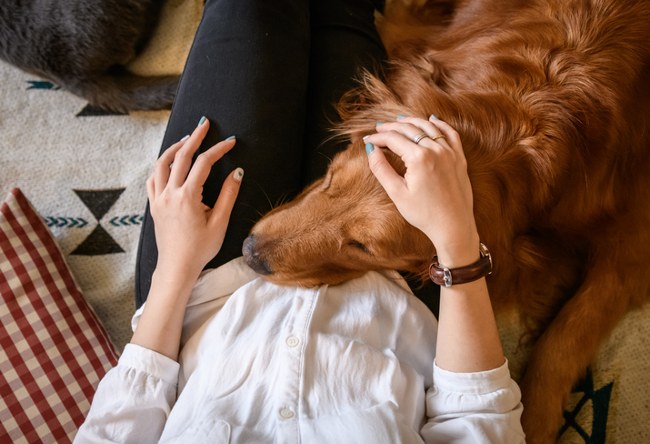 While time together is important, don't forget to give your pets individual time.  In many ways they are very different animals and you can only fully meet their individual needs on a one to one basis.  Your cat probably won't appreciate a game of football in the garden or balancing a biscuit on its nose, and your dog would find batting a piece of dangling wool with its paw pretty pointless!

Another important point is to provide each pet with its own bed or sleeping area.  While we love to see canine and feline curled up together in a basket, don't try to force them into this arrangement.  They need their own space and if they really want to snuggle up together, they will.

With perseverance your cat and dog should learn to accept each other, and with luck will become the best of friends.