Training your dog to keep quiet is easy once you know how, explains Tomkin Coleman. 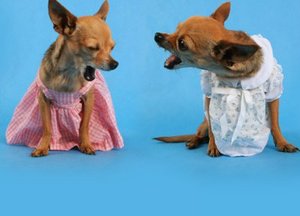 Quietening a barking dog is a quick and easy process, and doesn't cost any money.

However it's not an obvious process, hence the many dogs we hear barking all the time in parks, gardens or on street corners, with owners tugging at their pets' leads and yelling as the dogs completely ignore their commands.

My dog was driving me crazy until I learned how to stop his barking. His breed - husky - is known for making a lot of noise, and he barked and whined all the time. The situation was especially bad when the doorbell rang or he saw strangers. It was almost impossible to stop him once he started, and if there was another dog involved my husky would yap his head off until the dogs were separated and out of sight.

One weekend my friend came over to visit, who worked at a zoo and knew all about animals. In an hour she had my dog completely quiet, and taught me how to do it too. It took just one afternoon to solve a problem that had been driving me mad for the last three years.

The secret is not intuitive. First you teach the dog to bark! I thought my friend was insane when she told me this. Obviously my dog knew how to bark because he barked and whined all the time. However she explained that while my dog barked a lot, he couldn't bark on command.

First she taught him to bark on command, and then she taught him to be quiet on command. The whole process took less than an hour. My canine companion is fairly clever, so it may take other dogs longer, but it's an incredibly effective technique. Now, two years later, my dog is still not giving me any trouble.

Everything my friend did was very clear and precise, which was the main reason she got results so quickly. Your results may vary, but the clearer and more precise you can make everything, the better.

First go on a long walk with your dog to give him plenty of exercise. Your dog can't learn when he's all riled up.

Teaching your dog to bark

Fetch a box of treats. Then look at your dog. When he barks, immediately praise him and give him a treat. Don't let any time elapse between the bark and the treat. Soon he'll be barking a lot. Right now, the behaviour is coming before the cue. Shape the behaviour first, and then add your cue.

Teaching your dog to bark on command

Go away for a few minutes and come back. Ignore his barking and ignore everything else he does. Just stand there, doing nothing, not rewarding him at all, not even looking at him. It may take a long time, but eventually your dog will calm down, stop barking, and start doing his own thing. Once your dog calms down and stops barking, start working with him again. This time, only give him a treat when you say "Speak" and point at him, and then he barks.

Don't give him a treat for just barking on his own. This part will take a while, but he will eventually understand the command. You're rewarding him for behaviour he already is predisposed to do, you're just associating a command with it.

Teaching your dog to be quiet

Go away for a few minutes, and then come back. He'll probably be barking a lot when you come back, but again, stay totally still and don't reward him at all - no praising, no eye contact, nothing. Once he stops barking, count to five slowly to yourself. You may have to wait a long time before he'll stop barking enough for a full count of five, but it will happen eventually. Once you can count to five without any barking, then reward him with praise and a treat. Notice that at this point, the behaviour comes before the cue. Shape the behaviour first, and then add your cue.

Teaching your dog to be quiet on demand

Keep that up for a while until the behaviour sinks in, and then add the command. When he's not barking, hold up your hand as if you're signalling someone to stop, and say the command "Quiet". If he's quiet, then give him a treat and praise.

So the order is:

Soon your dog will know how to be quiet on demand.

Soon you'll have a dog that will go totally quiet when you tell him to.