Why cats prefer drinking from puddles

An insight into your cat's drinking habits. Ever wonder why they prefer to drink from puddles then their carefully selected water dish? 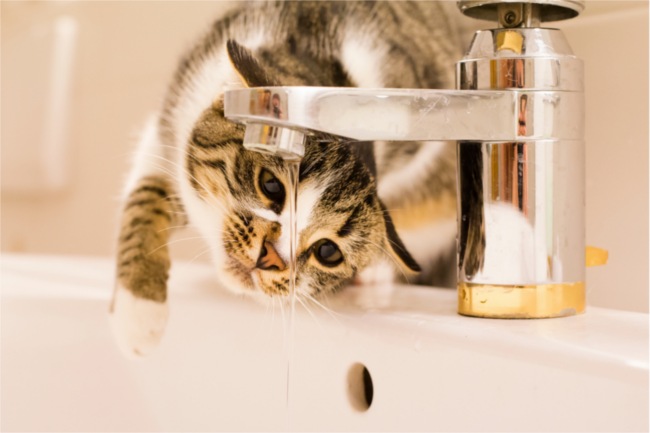 Have you ever wondered why your cat prefers to drink his water from dirty puddles, rather than that lovely dish with 'Tiddles' painted on? Apart from cat contrariness there are logical reasons why each feline has his own preference. Logical to a cat, that is. Here we explain what could be going on in your cat's mind.

Do you ever catch your cat drinking from the kitchen sink? Some cats prefer to drink from a running tap; this water looks and sounds fresh, much like a stream in the natural world. The same appeal applies to toilet water however, the cleaning products and air fresheners we use make this dangerous for your cat, so it’s best to keep that lid closed! A safer alternative and potentially more hygienic than constantly finding the cat in the sink, could be the special pet fountains that you can now buy; they aerate the water and provide a constant fresh and appealing flow for your cat to lap.

Perversely, other cats won't go near the fresh stuff. Tap water contains many chemicals, from chlorine to traces of detergent left over from the washing up. Because cats have very sensitive noses they can detect these, therefore you may find Mr Cuddles, and his newly washed coat, quenching his thirst from water that has fallen directly fallen from above in the form of a puddle. A bowl of water that has been sitting around for a few days may also be more appealing, because this allows the chemicals and their smell to disperse. The fact that it’s likely to be warmer than fresh cold tap water may also play a part.

To make the cat’s designated drinking bowl more appealing, you should wash your cat's dish every day with hot water and soap, but make sure you rinse it out thoroughly afterwards to get rid of all the detergent. Plastic bowls can harbour bacteria, even causing spots on your pet's chin, so a stainless steel or ceramic one is best; plus they are easier to clean!

Another reason why your cat doesn't drink from his dish may simply be that the positioning is wrong. Cats don't associate eating and drinking like we do. Just because your feline has been feeding, he may not want a drink at that particular moment. So consider placing his bowl away from the feeding area, somewhere separate that he knows he can go when he is thirsty. For older cats, the dish may be too low, so raising the height of the bowl could make the task easier. Many cats gets spooked by deep water and don’t like to drink from a narrow bowl in which their whiskers get wet.

If a cat starts playing with water, splashing around instead of drinking, it’s probably just bored. The answer -give him alternative stimulation, whether it’s in the form of extra attention or some fun pet toys. Finding these new toys in the water bowl... he could be hiding them in a place that he views as safe and his territory. The toys been given the feline seal of approval and providing a special basket may encourage him to put them in there instead.

Following these tips may encourage your fluffy friend to start using his desiccated water bowl but don’t be offended if you find your cat eagerly lapping up that fresh puddle... It’s not a defiant protest against your carefully chosen dish; it was just the most appealing option at the time.