Finding my voice after losing my husband to cancer

Jennie Clark's recalls the shock diagnosis of her husband's cancer and the invaluable support she received from Marie Curie nurses as he passed. 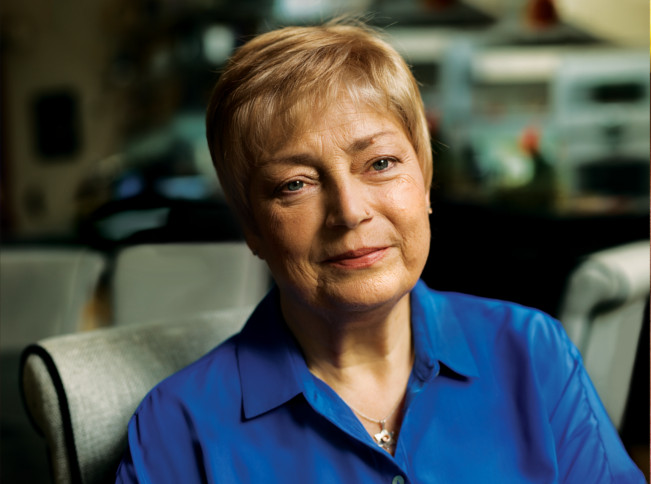 “My husband Ken was ill and he said he wanted to come home from hospital. We knew he was coming home to die. I think I thought we would be looking after him ourselves, but the hospital said we would have nurses coming in the night, and during the day there would be district nurses.

We had one Marie Curie lady and then another lady who came the evening he died. She was wonderful. She said hello to my husband, and to me, and then said to me ‘come into the kitchen, let’s have a cup of tea and you can tell me Ken’s story.’ That was really nice, she wanted to know his story and who he was - that meant a lot.

She then sent me off to bed, but then came down and said ‘your husband is not sleeping. Shall I give him something to help him sleep?’

I knew what he was doing, he was checking her out, not allowing himself to sleep.

I went back to bed but then she came to me again and said ‘come and be with him’. She made the whole thing beautiful. It sounds ridiculous saying your husband dying was beautiful but it was.

Everything she did, she did with such care.

Everything she did, she did with such care. When it was time for Ken to be taken away, she said ‘don’t worry, I’ll make sure he is treated with dignity.’

Ken was a truly wonderful husband – we had a very happy marriage and I had 40 years with him. I try to look on the positive side and that I had that time with him. He worked as a printer, on the artistic side, and that’s what he did all his life. He hadn’t yet retired and that does make me sad, that he didn’t get to enjoy a retirement.

We only found out he had cancer when it was already secondaries. He had a cyst on his pancreas and he had a scan every year to check it.

He had one of these regular scans and didn’t get the results – he thought no news was good news, I think he thought if there was something, they would have contacted him.

Anyway, he started to get pains in his stomach and was finding it difficult to eat, which wasn’t like him as he had always been a very good eater. He went to his GP in January and that’s when they realised he hadn’t ever had those results back, and the GP chased it up. He was then called to see a specialist very quickly, and that’s when I thought there is definitely a problem here.

He was seen for an exploratory and they said he had nodules in his abdomen, we didn’t really know what this meant, but when I mentioned it to someone at work who had, had breast cancer she said ‘oh he’s got secondaries then’.

When he went back to see the consultant, there was a specialist nurse there, seeing her there I knew it was pretty serious.

They said it was very serious, and they wanted to do an endoscopy. The consultant oncologist there said that he would be put onto chemotherapy. Ken said to me at that stage ‘when it’s my time to go, I don’t mind going but I want to be sure that you and the kids are looked after.’

He was always my better half

I said to Ken: ‘I absolutely want you to fight but don’t fight for me. When you’ve had enough, tell me.'

Nobody told me directly that it was going to be that short, but I think Ken did perhaps have an idea. There were times when things were said. I was talking to a nurse from the hospice and said something about next year, about Ken and I doing something next year, and she said ‘I don’t think Ken will be here next year.’ That did stop me in my tracks and realise that it wasn’t going to be as long as I hoped.  It did mean we did the things we wanted to – we took our granddaughter to Disneyland and that was lovely.

He wanted to come home to die. He did say I have had a chat with the nurses about what I want to do. He said ‘I want to be home but not if you can’t cope.’ I was worried about coping but the thing is you soon get used to coping.

Ken was in hospital 72 hours before he died, and had, had enough. He just wanted to go home.  He asked to see the palliative care doctor.

I said to Ken: ‘I absolutely want you to fight but don’t fight for me. When you’ve had enough, tell me.’

He told me on the Saturday that he had, had enough.  He couldn’t get out of bed and he just felt awful – he had had enough. The nurse was saying that the ward consultant wasn’t in today, and the nurse said Ken could not be discharged until the next day when the consultant returned.  The palliative doctor then said "make it today he gets home" and the wonderful ward nurses made huge efforts to get the discharge papers signed off.

So he came home.

I said to him ‘what am I going to do without you?’ I just couldn’t imagine.

He said to me ‘you will go to work and get on with things and carry on.’ That’s what he expected of me so that’s what I did.

The hospital had got me some counselling, and I am a trained counsellor myself, so I did take that up and it helped.

I still miss him terribly. Recently, I dreamt that he was there and I was cuddling him, and it was just so very real. I woke up and it was like I felt his presence. I know I am never going to get over losing him but we had nearly 40 years together, and he died at home like he wanted to, with me there with him.

He died just before our ruby wedding anniversary. I bought a ruby ring I liked before he died, he wanted me to, as I had seen it and he said ‘please go and buy it.’

It can be hard, but I keep myself busy and do things – I am a school governor, also a ‘street friend’ so I pick up rubbish, I’m part of my GP’s patient participation board, and a mentor for children who are having difficulties at school. I also pick up my grandchildren from school a couple of times a week.

After the funeral, we knew as a family that we wanted to support Marie Curie.

My daughter did the big swim. Two and a half years ago I was asked if I was interested in taking part in the local group of volunteers. I’ve done the Blooming Great Tea Party and sold raffle tickets and quiz’s, all of that.

I recently joined the Expert Voices group. Our members are people who have had first-hand experience of end-of-life care as a carer, family member or friend. The group plays a key role in providing support and helps Marie Curie to help improve our services and develop new ideas.

Marie Curie cares for people living with terminal illness, and their families, offering expert guidance and support to help them get the most from the time they have left. This March, support the Great Daffodil Appeal to help Marie Curie Nurses be there for more people who need them.

Donate and wear your daffodil.