How giving back helped with my loss

Kelvin Carter shares how the loss of his first wife, Sylvia, to liver cancer of the oesophagus, spurred him to fund raise for Marie Curie as a tribute to Sylvia and the dedication of the charity's nurses. 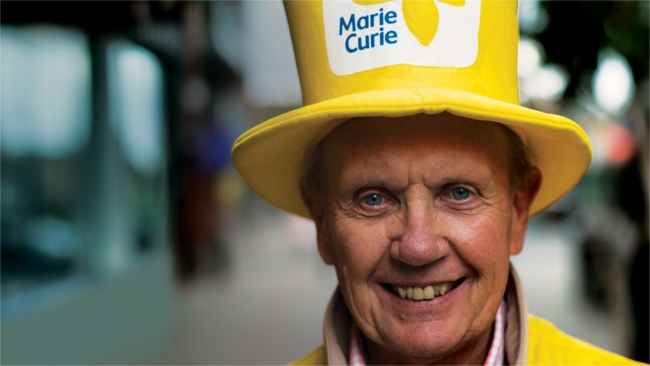 My first wife, Sylvia Carter, was a Staff Nurse at the Marie Curie Hospice in Tiverton, Devon. She died in August 1994, of liver cancer, in the same hospice.

We lived in the Croydon area, in 1990 moved to Devon and she started at the Marie Curie Hospice at Tiverton in 1991. She carried on working there until she became ill. Like with all her nursing, she enjoyed being in a position to be able to help people. That was why she did nursing – that’s what she wanted to do.

I think she was in the hospice for about six or seven weeks before she died. To think that those who had worked with her, and loved her, were able to look after her. It was amazing – it couldn’t have been better.

I think she was in the hospice for about six or seven weeks before she died. The Matron at the hospice offered and I was absolutely delighted, to think that the people who had worked with her, and loved her, were able to look after her. It was amazing – it couldn’t have been better.

My wife realised that I wouldn’t be in a position to do all the things necessary to look after her, whereas they could. She loved them and they loved her, that’s what motivates me to collect for Marie Curie. The thought that so many lovely people like that can take care of people and give them the best that they deserve.

I started off by organising a dance in aid of Marie Curie in the village hall, in Plymtree in Devon, the village where I lived at the time. That was the first time I raised money for Marie Curie, and took the cheque to the hospice at Tiverton.

If you’ve had the misfortune, like myself, to go through this situation of losing a loved one, you can’t bring them back, but you can help those people who carry the good work on.

I enjoy talking to people about Marie Curie when I’m collecting. That’s what gives me so much pleasure. To think that what I might have to say to them can be of help. There are quite a few people who actually like to talk about their recent bereavements. I like to feel that the experience I had, helps to make them feel that they’re not on their own. I get tremendous pleasure from that. It’s just amazing to think that people want to talk to you and that you’re in a position that you can help them.

I’ve met many, many people, during the course of my collections over the years, who have been helped. I don’t recall meeting anyone who hadn’t heard about Marie Curie. I would encourage anyone to collect. If you’ve had the misfortune, like myself, to go through this situation of losing a loved one, you can’t bring them back, but you can help those people who carry the good work on.

It takes a special kind of person to be a Marie Curie Nurse. I don’t know how my wife did it, mind you. She didn’t bring her work home with her, even though she probably saw some cases that she might have wanted to talk about. I think she just loved nursing and got on with it. I think nursing is more than a profession; it’s a calling.

I just can’t express what pleasure it gives me to be part of raising money for Marie Curie. I’ve had some great times and I’ve thoroughly enjoyed it. As long as my body allows me to, I’ll continue to do my best to support them.

Marie Curie cares for people living with terminal illness, and their families, offering expert guidance and support to help them get the most from the time they have left. This March, support the Great Daffodil Appeal to help Marie Curie Nurses be there for more people who need them.

Donate and wear your daffodil.