A possible future in which the victim of a crime is the final arbiter of the sentence imposed on the perpetrator rather than the justice system is the intriguing theme of Debbie Tucker Green’s absorbing but ultimately unsatisfying new 60-minute play Hang (Royal Court Theatre).

A middle-aged black woman enters an office where she must decide the fate of the man who has harmed her in some unspecified but appallingly violent way. She has that power. She can chose what fate befalls him by selecting the means by which he will die: lethal injection, the gas chamber or the noose.

This is a taut tense and measured piece about the nature of justice but it is also frustratingly vague, lacking dramatic impetus and storyline. We never learn what the crime is, although we are led to believe it is rape, possibly in front of the woman’s children, and the contents of a vital letter written by the perpetrator is never revealed. The play, though, manages to cast a critical eye over the moral ambivalence of the criminal justice system, in particular the bureaucratic inadequacy in the face of grief and anger.

What propels the drama is an impassioned performance by Marianne Jean Baptiste, last seen as the determined defence barrister in the second series of Broadchurch. As the nameless victim she impresses here as a damaged woman who manages to find ways to doubt and undermine her hosts, initially wounded and internal, then angry and lashing out. Making her final decision on the criminal’s fate, her voice is strong but her hands shaking, letting us glimpse the vulnerability beneath the desire for revenge.

The other two characters, referred to as simply One and Two, in what I imagine is a victim support unit, are realistically played by Claire Rushbroook and Shane Zana respectively. Their meaningless jargon using words like “role-play”, “transparency” and “client”, is satirised by Tucker Green and raises some grim laughs.

Runs at the Royal Court theatre until Saturday 18 July 2015. 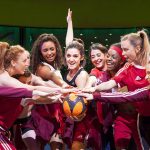