The Motherf***er with the Hat

HomeSociety & PoliticsThe Motherf***er with the Hat 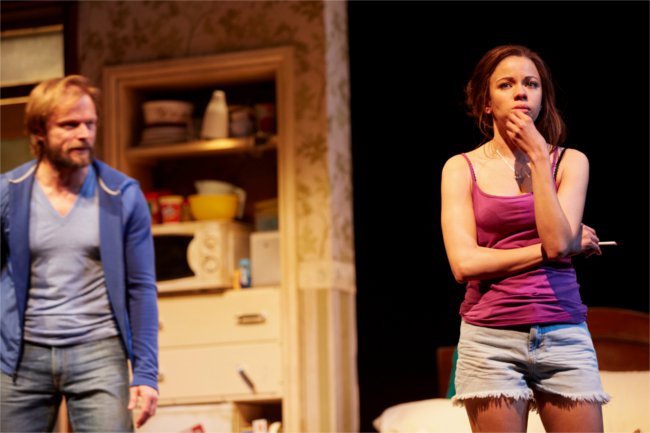 Don’t be put off by the title of Stephen Adly Guirgis’s Tony-nominated play The Motherfucker in the Hat (Lyttleton Theatre at the national Theatre), directed by Indhu Rubashingham as it provides a devastating look at love and addiction, finding light even in the darkest of corners of New York City.

Things are looking up for Jackie, a recovering alcoholic trying to piece his life together after a spell in prison. He might even have found a new job. Then he spots a man’s hat in the apartment of his girlfriend Veronica, with whom he has been going out since they were 13 and is a junkie, and everything starts to unravel in their troubled relationship.

This profane but very funny play flips between comedy and pain in the twitch of an eye and is by turns ferocious, electrifying, gripping and ultimately tender and forgiving. Guirgis, whose best known work is Jesus Hopped the A Train, is adept at portraying a mix of gritty urban naturalism and moral seriousness and his ability to convey bruising betrayals, agonising avoidance techniques and furious truth telling are issues that concern us all as we try to numb the pain of living.

The mainly American cast bring an impressive intensity to their roles, with the result that their flawed but very human characters come vividly to life – Ricardo Chavra as the battered sympathetic Jackie, Flor de Liz Perez as his long-suffering mercurial girlfriend Veronica, Alex Newman as his manipulative 15-years sober ‘patron’ Ralph, Nathanial Armin as Ralph’s cuckolded wife, and Yul Vasquez as Julio.

In short then this rollercoaster of a play emerges as a piercing study of individuals trying to take control of their lives and provides considerable food for thought.

The Motherf***er with the Hat

Previous Story
Antidepressant use in menopause linked to broken bones
→