A blackly comic exploration of relationships overshadowed by the political furore surrounding the poisoning and murder of Alexander Litvinenko. Reviewed by Laurence Green. 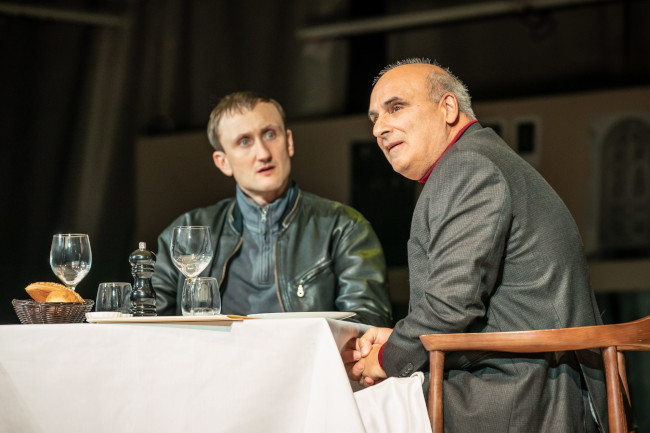 It starts fairly conventionally, as we see Alexander brought into hospital by his wife Marina when he feels unwell. Although he does not yet know, he is suffering from radiation poisoning. Eventually he is questioned by British police, sparking a lengthy flashback to the chaos of '90s Russia, where anti-corruption officer Alexander falls foul of his bosses for refusing to assassinate flamboyant oligarch Boris Berezovsky and he himself becomes a target of the Russian state. and what started with the audacious administration of a lethal dose of polonium in a London restaurant spiralled into a shocking story of international subterfuge spanning Russian mobsters and dissidents, the KGB, spies and the British police force.

This isn't a piece of journalism masquerading as a drama and is not a political play in any conventional sense. Pebble's aim is to explore the human story and the black comedy surrounding the scandalous events behind the death of the KGB whistleblower. It is strange, funny, and eventually very angry piece of theatre. But the Enron playwright seems to have bitten off more than she can chew and starts to allow the mounting difficulty in telling this story coherently to wilfully buckle her play. Actors step out of character and involve the audience and there's a dance routine, a shadow puppet show about the discovery of polonium and a song from Berezovsky. Timelines overlap but the fascination and horrific story remains intact. Prebble's risky theatricalisation makes the piece seem uneven and tends to reduce its overall impact.

Tom Scutt's set, like the story, is steadily broken apart, with a succession of short scenes in film-like fashion, so we can see its workings.

Performances, though, are all tip-top. Tom Brooke makes a convincing, deadpan Alexander, MyAnna Buring is excellent as his resilient wife Marina, Michael Shaeffer and Lloyd Hutchinson are effective as Alexander's idiotic assassins, preening Andrei and dopey Dmitri respectively, and Reece Shearsmith is a camp, posturing and dangerous Vladimir Putin, the alarming protégé of Berezovsky, played by Peter Polycarpou, with a striking resemblance to the real life character.

In short a helter-skelter ride through the shadowy world of interenational espionage.

Plays at the Old Vic Theatre until Saturday 5 October 2019.