Cult 2012 film Berberian Sound Studios, playing at the Donmar Warehouse, is an example of how what works on celluloid can fall flat in the theatre. 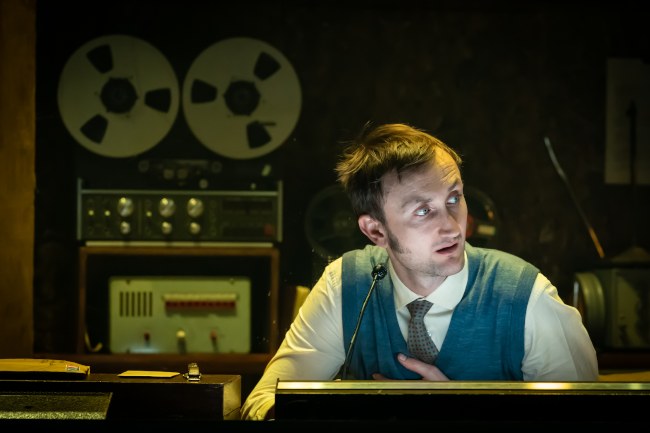 Stage horror is not a genre with a glowing track record and Tom Scutt's theatrical version of Peter Strickland's cult 2012 film Berberian Sound Studios (Donmar Warehouse) does nothing to buck this trend, working neither as horror nor dark comedy.

The year is 1976, the place Italy  and Gilderoy (Tom Brooke) is a long way from home. His work as a sound engineer for Dorking-based nature documentaries has not gone unnoticed. He has swapped the foley table of his garden shed for the glamour of the Berberian Sound Studio. Here, at the height of giallo horror, cabbages become corpses, your own voice can be over-dubbed and silence speaks louder than words.

Set in a reconstructed Seventies world of Italian machismo, exploited women and the genre of kitsch, pulpy films that expressed those gender extremes with lashings of horror and erotic excess, the play fails to find a new lease of macabre life on stage despite the proximity and claustrophobic intensity of the Donmar. Indeed what works on celluloid can fall flat in the theatre. The text and complexity of the piece seems to have reduced the drama to a bare minimum and this is not helped by having most of the dialogue spoken in Italian without the benefit of surtitles, with the result that the tension and menace generated by the movie is completely missing.

Designer Tom Scutt--making his directorial debut at the Donmar--at least makes us feel we are in a recording environment, complete with glass-fronted control-room, side-booth, mics and flashing "Silenzio" sign.

But this hardly feels like compensation for a drama with nowhere to go!

Plays at the Donmar Warehouse until Saturday 30 March 2019.