A show that captures the dilemma of the alienated teen - but doesn't succeed in getting the viewer to surrender to its emotional involvement. 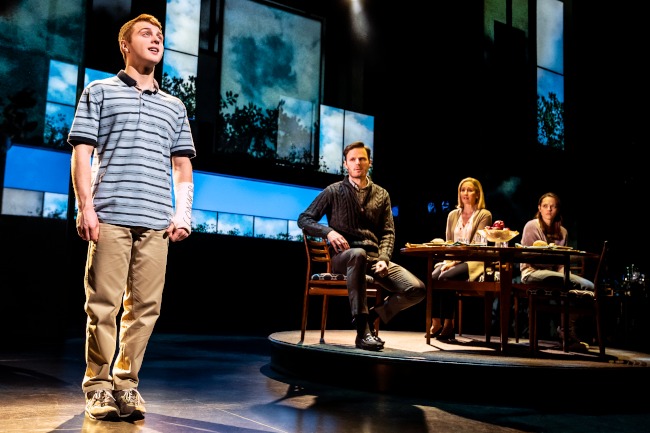 Grief, deception and loneliness come to the fore in Michael Greif's multi-Tony award winning musical Dear Evan Hansen (Noel Coward Theatre), with score and lyrics by Benji Pasek and Justin Paul--the team behind the soundtrack of The Greatest Showman--and with book by Steven Levenson.

Evan Hansen has no friends. He's one of the many teenagers living with anxiety and depression, feeling completely isolated and invisible in a world that's meant to be more connected to them. His mum feels she's losing him and his therapy isn't working. So his therapist urges  him to write encouraging letters to himself. One such letter is appropriated by a bullying classmate, Connor, shortly before he kills himself. Finding the letter, Connor's parents assume it was genuinely addressed to Evan, who goes along with the deception. Indeed he creates a wholly fabricated friendship with the dead boy, finds himself warmly embraced by Connor's family and sees his memorial tribute to the suicidal teenager go viral on social media. His motives are good--to make Connor's family feel better--but the lies proliferate and he is faced with an unenviable choice--should he continue with the charade or reveal the truth and risked being shunned by and sundry?

It is an intriguing and topical story that touches on a wide range of subjects, in particular the way grief allows families to mythologise the dead and how the internet can turn fake news into assumed fact. But the plot relies on a large amount of coincidence and Evan's use of the feigned friendship to woo Connor's hitherto unattainable, now vulnerable sister, is at best opportunistic, at worst downright creepy. The score and lyrics have a clean-cut simplicity and the songs seem to happen instinctively, rather than being planned. But none are especially memorable.

Straight out of drama school, Sam Tutty's performance is startlingly raw and convincing, with not a trace of sentimentality or mawkishness. His Evan is a tight, jittery knot of anxiety, embarrassed by his own existence, looking the whole time like he wishes the world would swallow him up. His panicky rabbit-in-the-headlights expression never leaves his pale face and he fiddles with his fingers and shirt buttons like he's surprised he's got limbs and not sure what to do with them. Lucy Anderson makes a striking professional debut as Evan's crush, Zoe, capturing the emotional wariness in Connor's sister and there is fine work from Rebecca McKinnis as Evan's single mum, working as a nurse, while taking evening classes in the hope of giving Evan a better life. There's also a soul-baring performance from Lauren Ward as Connor's mum, Cynthia.

Everything is expertly done, and the show certainly captures the dilemma of the alienated teen--but I have to admit I didn't totally surrender to its emotional involvement.

Booking to May 2 at Noel Coward Theatre.