Rhys Ifans and Rakie Ayola conjure a tone of impending doom in this intriguing post apocalyptic drama, but despite their committed performances the result is cold, woolly and unmoving. 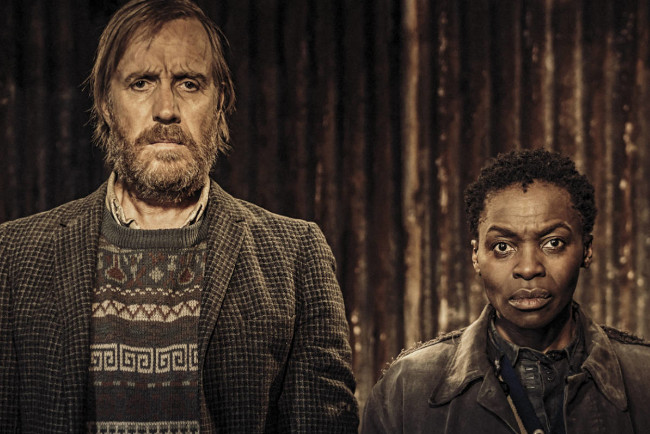 Loss - of family, of identity, of language, and of social stability, but not of hope - is explored by Welsh playwright Ed Thomas in his post apocalyptic fantasy On Bear Ridge (Royal Court Theatre), directed by Vicky Featherstone.

Set atop a mountain in a rural location, presumably Wales, John Daniel and his wife Noni are anchored by memories and mutual devotion to their remote mountain farm and butcher shop despite the loss of their livestock, their furniture, their son and "the old language".

Something catastrophic has happened to the nearby town, leaving them totally isolated--their food supply is dwindling and they have no contact with the outside world. That is until a pistol-wielding army captain appears--he is part of the operation to get anyone left on the ridge to leave so that it can be razed to the ground. He is a man clearly haunted by his past and traumatised by what he has seen during the ongoing war. This fits in well with the couple, whose son is buried on the mountain nearby, which is one of the reasons they refuse to leave their home.

Poetry, dystopian despair and whimsy battle for supremacy in a play that starts off tantalising and ends up maddening. Comic exchanges give way to long, harrowing speeches, which are then undercut by bathos--someone suggests tea, or asks to use the bathroom. Indeed this is a piece filled with a shiver-making sense of mourning but also a fair amount of shudder-making mumbo-jumbo.

The tone is one of impending doom. This is underlined by Elliot Grigg's bleak lighting and Mike Beer's sound design which constantly reminds us that the troubled world is never far away.

Rhys Ifans, his eyes sadly bereft, his beard mighty and unkempt, is magnetic as John Daniel, ranging between bombast and delicate humour. Surrounded by meat hooks and knives, his bloodstained apparel--pyjama bottoms, layers, little warmth signified--give him a scrounger's air. Rakie Ayola, on the other hand, is calm and resilient as his wife Noni, while Jason Hughes convinces as a haunted military man.

But, despite these committed performances, this intriguing 90-minute play winds up being cold, woolly and unmoving. If only Featherstone had applied more pressure on Thomas to stick more strongly to his core themes of national loss and dislocation and to find more depth in the characters, we might have had a truly impressive drama.