Laurence Green reviews the claustrophobic and atmospheric On Blueberry Hill, a drama in which immaculate performances help lift this powerful two-hander so vividly to life. 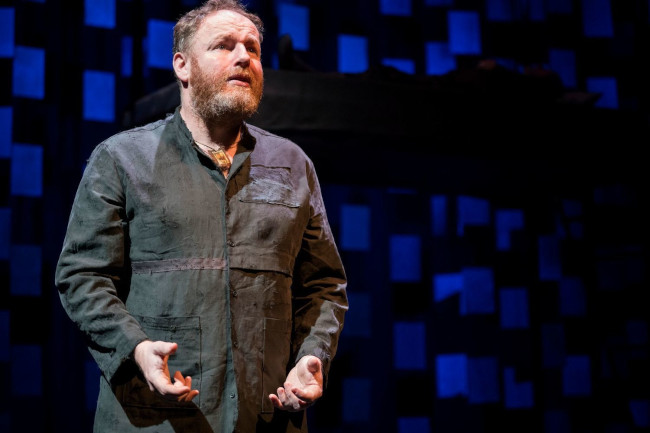 Two men, PJ and Christy, are incarcerated in a prison cell together, having both committed a murder each. PJ was an ex-priest and Christy a tinker. PJ is the younger of the two and both experienced the deaths of their parents when they were young children. PJ was in love with a young seminarian. His mother was violently murdered, and Christy's father was likewise killed in a fight. Their life paths converge in the prison cell as a result of a deliberate act by a sadistic prison guard who is aware of their connection and situation. As the men reflect on the hope and torment of life outside, they slowly uncover the events that have led them to their world with explosive, bittersweet consequences.

The play takes the form of two intercut monologues and is a work suffused with loss but also love. Sometimes it suffers from verbal overload, but displays Barry's fondness for a near lyrical style and displays a rich intimacy. Indeed  poetic writing flows throughout the piece: "There I am--I can almost see myself a young fella at Maynooth, walking along the cinder path under the host of beech trees, with my Gaelic Bible, the wind snatching at the flimsy paper", PJ recalls. Later he describes the boy he was in love with: "There was nothing of the child in him, nothing of the man, like a  marble statue, glowing, vibrant but also frozen. . .eternal. . .if I could properly describe him I think everything would be understood". With elegance and dexterity Barry tightens the piece's emotional hold and we come to understand the terrible things that bind these two together and the nature of the bond between them.

The sparse set of a bunk bed and backdrop of old letters by Sabine Dargent and effective lighting by Mark Galione suitably set the claustrophobic atmosphere and space for the drama being played out within the prison walls.

But it is the immaculate performance that bring this powerful two-hander so vividly to life. David Ganly's bearded and rumpled PJ addresses his recollections to us--his invisible confessors. He winds back to an idyllic childhood in the Sixties, a time when the kids roamed free and his mother was the centre of the universe. Niall Buggy, the older of the two, pragmatic and resigned, is no less arresting as Christy, whom we learn was drawn into a vortex of grief that bred a murderous rage, worthy of Greek tragedy.

As the titular Fats Domino blues classic that opens and closes the play wafts over the auditorium, we are left to reflect on the events that shaped these men's lives.