Andrew Scott steals the show with a fascinatingly detailed interpretation of a character who is flirtatious, stroppy and sardonic, yet also drowning in melancholy in Noel Coward's comedy. Laurence Green reviews. 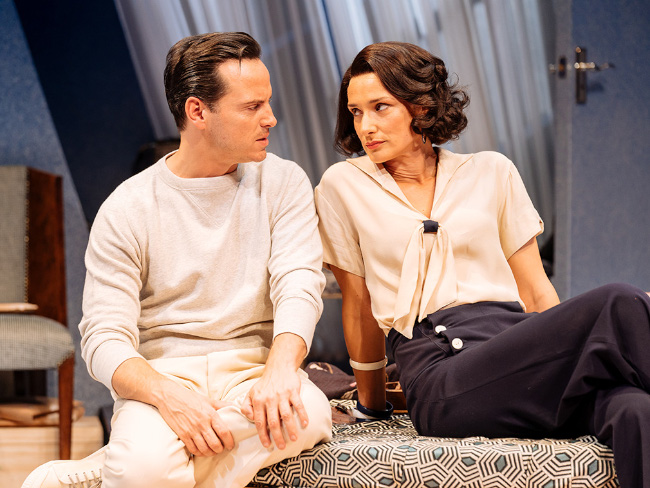 A virtuosic performance by Andrew Scott as suave and scathing matinee idol Garry Essendine sets the stage alight in Matthew Warchus's glorious new production of Noel Coward's imperishable 1943 comedy Present Laughter (Old Vic Theatre), which seems so fresh and funny you'd think it was being staged for the first time.

When the play begins Garry emerges from slumber in fancy dress, sporting a piratical eyepatch and a waistcoat as if he had come from JM Barrie's Neverland rather than dreamland. He is in every inch an actor, even when he's not meant to be performing and wittily lapses into an outrageous theatricality to keep people at bay. He pouts and struts around in peacock fashion to fend off unwanted lovers and importunate playwrights and to protect the small clique of chums that is essential to his wellbeing. But Garry is a comic actor whose developing mid-life crisis begins to set in in every part of his life. As he prepares to embark on on an overseas tour, his colourful life is in danger of spiralling out of control and we follow him as he navigates his marriage and career, while his many and various relationships compete for his attention. His remaining days at home are a chaotic whirlwind of love, sex, panic and soul-searching.

The play itself is flimsy and productions often try to compensate this with a somewhat laboured, shouty outrageousness that only serves to show up the writing's weaker moments. But here it is realised with panache and a rich sense of mischief. Director Matthew Warchus doesn't shy away from opportunities for farce, yet he is alive to Coward's verbal dexterity. Flipping the gender of a couple of the smaller roles yields sexy results and there are times when the dialogue feels as silky as Garry's 18 dressing gowns.

Rob Howell's blue art deco-styled set beautifully embellishes the drama, while never distracting from the reality of the situation.

But this is Andrew (best known from playing Moriarty in the BBC TV drama Sherlock) Scott's show and he gives a fascinatingly detailed interpretation of a character who is flirtatious, stroppy and sardonic, yet also drowning in melancholy. He finds reservations of sadness and self-knowledge in this man and achieves something genuinely audacious in making him both odious and adorable. Strong support comes from Sophie Thompson, suitably caustic as Garry's long-suffering secretary Monica, Indira Varma as his elegant, canny and not completely estranged wife Liz, and Luke Thallon as the febrile young playwright who is excited by rejection.

Coward here is writing about a bohemian world threatened by invasion from outsiders, as well as a teasing consideration of acting and its perils, and is generally thought to be part-autobiographical. One thing is certain--he would have loved Scott's bravura performance.