'A timeless work, performed with great bravado, which manages to be both powerful and thought-provoking.' Laurence Green reviews The Doctor. 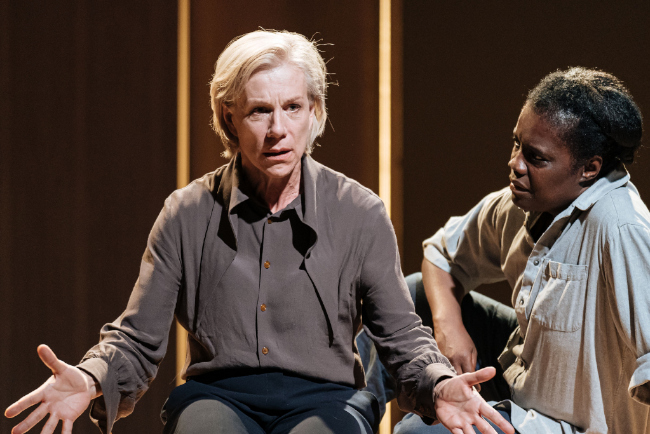 The protagonist is Ruth Wolff, a secular Jewish doctor who runs a prestigious medical institution, specialising in research into a cure for Alzheimer's. When Ruth physically prevents a priest from seeing a 14-year-old girl, dying from the septic results of a self-administered abortion, stating it's in the patient's best interests, a public outcry ensues. petitions are started, it goes viral on social media and eventually Ruth is ruthlessly cross-examined during a hostile television debate. The toxic publicity the case attracts jeopardises not only Ruth's future but that of the institute and a government-bankrolled new building.

First performed in 1912, Schnitzler's play offers a devastating portrait of Viennese anti-Semitism in showing a Jewish doctor attacked for refusing a Catholic priest to administer the last rites to a patient. Icke retains Schnitzler's premise, while subtly rewriting it for the 21st century, and thereby heightening the play's contemporary relevance.

At the heart of the play lie two crucial issues, handled with exemplary fairness. One is whether the purity of medical ethics supersedes all other considerations. The Other related topic is the danger of constantly playing identity politics: as one of Ruth's colleagues points out, it is irrelevant whether a doctor is white, Jewish, atheist, or a woman, and even more destructive to allow the professions to be judged by sanctimonious 'do-gooders'.

Hildegard Bechtler's set design is as clinical as they come, a sterile hospital environment of pale wood panelling and rows of penetrating strip lights that occasionally blink. A large corporate table rotates on an excrutiatingly slow revolve, while a live soundtrack of repeated drum beats keeps time lmost without pause.

Juliet Stevenson, full of smouldering frustration and just-visible terror, gives a masterful central performance. She shows Ruth to be brusque, politically naïve and intolerant of other people's failings, especially when it comes to the misuse of language. But while Stevenson shows how integrity can turn into obduracy, she also beautifully portrays the human cost of making medicine one's god. Fine support comes from Paul Higgins as the impassioned priest, Naomi Wirthner as her most implacable opponent. Pamela Nomvete as her fiercest champion and Ria Zmitrowicz as her betrayed friend.

The drama is admittedly slow to really get going--this is a play of words rather than actions--and the decision to cast women to play male roles and black actors to play white characters is a somewhat eccentric one.

But there is no denying this is a timeless work, performed with great bravado, which manages to be both powerful and thought-provoking.

Runs until Saturday 28 Septermber at the Almeida Theatre, London.