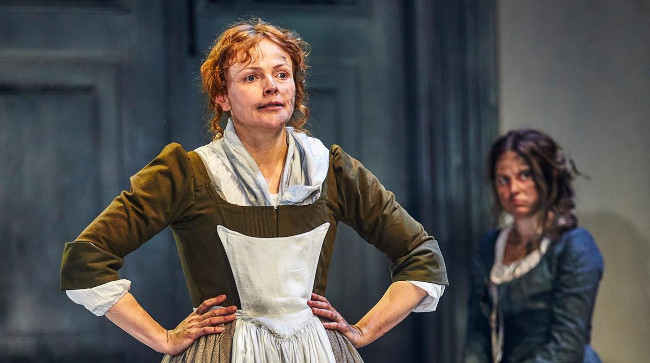 If you can imagine a feminist courtroom drama in the style of twelve Angry Men you may get some idea of the flavour of Lucy Kirkwood's ambitious new play The Welkin (NT's Lyttelton auditorium), directed by James Macdonald.

We're in rural Suffolk, the year 1759. As the country waits for Halley's comet, Sally Poppy is sentenced to hang for the heinous murder of the 11-year-old daughter of a prominent local noble family. Her lover Thomas Mackay has already been hanged and Sally will soon follow. However when she claims to be pregnant, a jury of 12 matrons are taken from their housework to decide whether she is telling the truth, or simply trying to escape the noose. With only midwife Lizzie Luke prepared to defend the girl and a mob baying for blood outside, the matrons wrestle with their new authority and the devil in their midst.

The play is divided into chapters and the opening one is key: a tableau of women engaged in arduous household chores, washing clothes, feeding children, sewing linen, beating carpets and so on. It is a very striking scene and highlights what was expected of each woman at the time, collectively, it's evidently a group ground down and enslaved by incessant domesticity. Kirkwood uses a clever device to sketch in her characters and set the tone of the piece, both brutally honest and smartly irreverent. As each juror swears in, we hear their inner voices, so we learn that one has 21 children and has had three husbands, another 12 miscarriages, one is concerned about getting home to her boiled bacon dinner, another by the menopause.

Science is pitted against superstition, male expertise against female experience and an inadequate legal system against mob hunger for justice. However the drama is static when it needs to burst into life and remote when it needs to feel intimate. Far too many lines are not helped by some dodgy accents and inaudible to the extent that I found myself stumbling over various key plot points.

Bunny Christie's Georgian townhouse set with its muted hues and classical compositions, has the formal elegance of a Vermeer painting.

Maxine Peake gives fire and fury to sturdy midwife Lizzie and would seem the natural leader, but distinctions of class, wealth and fecundity shift the power around the group. Haydn Gwynne shows her fore-woman's class-based entitlement, while Ria Zmitrowicz is an unrepentant Sally. Good support is provided by Cecilia Noble, June Watson and Jenny Galloway.

At just under three hours, the play is overlong and would have benefitted from  being sharper and tighter, but you can't deny the sheer gutsy audacity of it all.