Foodie heaven: travel guide to the Emilia-Romagna region, the gastronomic heart of Italy. 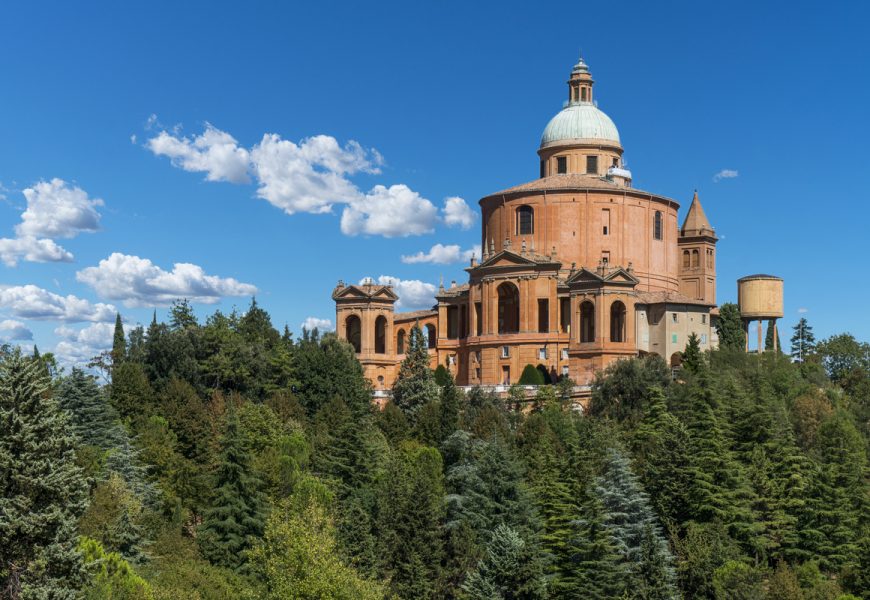 About the Emilia-Romagna region

Perched at the bottom of the Apennine mountains opposite Tuscany, Emilia-Romagna is quintessential Italy. Here, the towns remain 30km apart because that’s how far the Roman army could walk in a day and the shops still shut between 1 and 4pm for a long, leisurely lunch – and it’s easy to see why. Everything about Emilia-Romagna – Italy’s richest region – is decadent, from the sumptuous food, the architecture and the fabulous shopping. Even the architecture is rich; lavish medieval stone mansions soaked in earthy reds and oranges, peppered with sculptures and pockmarked with gold.

It’s the region that invented parmesan cheese, Parma ham, traditional balsamic vinegar, handmade pastas and red sparkling wines like Lambrusco – and unless you have been to Emilia and tasted the real thing here amongst the foothills, you haven’t tasted them at all. 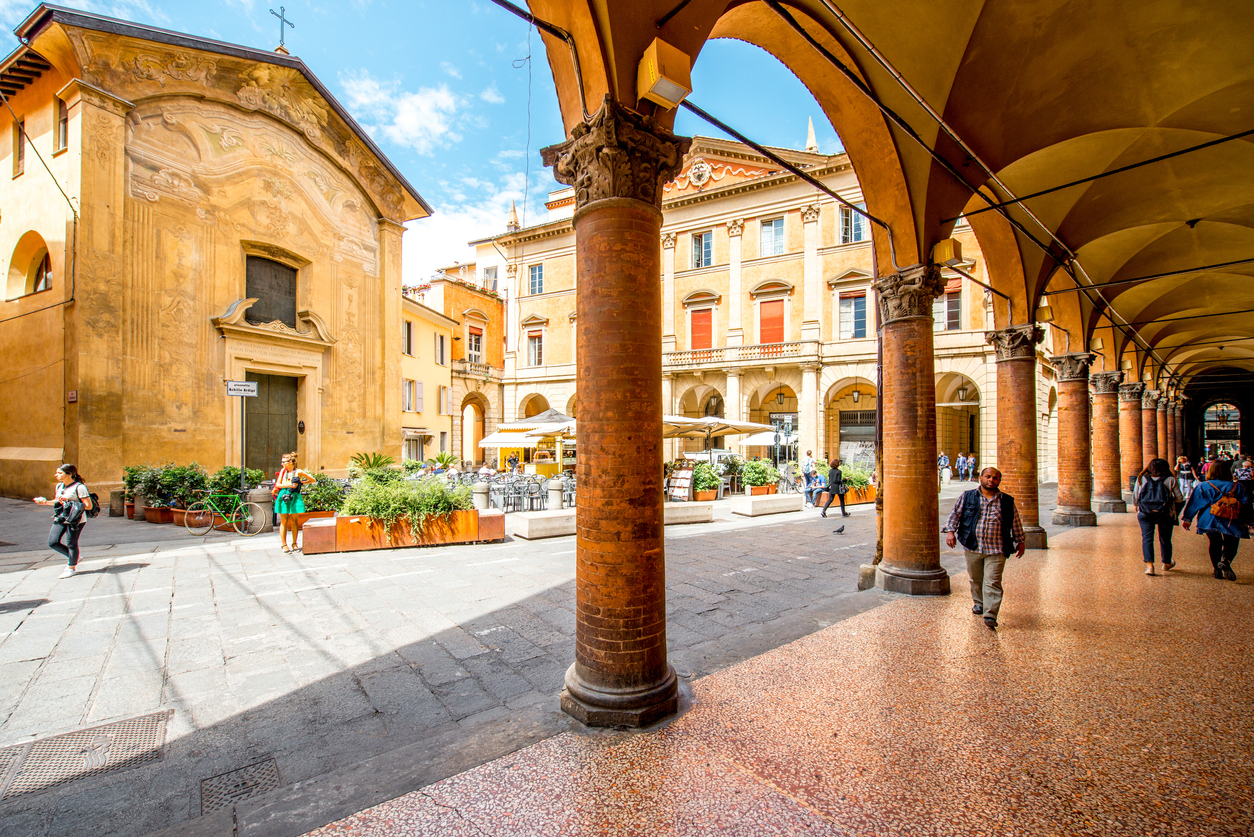 The capital of Emilia-Romagna is Bologna, famous for its many towers, the oldest university in Europe, its golden opera houses, tortellini and Bolognaise sauce; the city is known as the fat – La Grassa – for its rich cuisine.

You’ll love the beautiful earthy buildings, the bustling picturesque medieval city centre, the arched porticoes that line the streets with their Roman columns and the old men huddled at restaurant tables, quaffing bubbly and arguing loudly about politics over tortellini.

In the old city centre, visit the gothic church of San Francesco, the gorgeous main square Piazza Maggiore, edged by its stately mansions, Neptune’s Square with its imposing sculpture, the library with its glass floor that reveals the Roman foundations below, and the intricately decorated Basilica of San Petronio with its stunning sculptures and frescoes. Do yourself a favour and take in a performance at the Teatro Comunale – the gorgeous theatre is an experience in itself – or if shopping’s more your thing make an appearance at Saturday’s weekly street market for cut-price leather shoes and jackets, and lots more.

Don’t miss the spooky Santo Stefano church complex, dating back to the 5th century and built over a temple to Isis, and make sure you leave time to climb the steps of the famous 12th century towers of Due Torri which famously lean in towards each other– but only if you’re feeling very brave and energetic – there are almost 400 steps. Still haven’t worked off all the pasta? Climb up into the hills to visit the beautiful domed temple of San Luca, or go on a fast-paced The Broker tour and follow in the footsteps of the hero of John Grisham’s acclaimed thriller.

Eat at La Taverna del Postiglione, Via Marchesana, 6, a cosy restaurant where the locals go for their tagliatelle Bolognaise fix – never spaghetti; suggest the combination and Italians will recoil in horror. For dinner, make sure you head to the Osteria Broccaindosso, Via Broccaindosso, 7. It’s a hole in the wall with no sign post, but inside you’ll find a vibey eatery, famous for its fabulous food and decadent deserts.

Stay at the comfortable Golden Tulip Aemilia Hotel, Via Zaccherini Alvisi 16, a short walk from the old centre, with a jacuzzi and deck chairs on the roof for stunning views over the city. Or, for medieval charm, stay in a the fabulously creepy Prendiparte Tower. 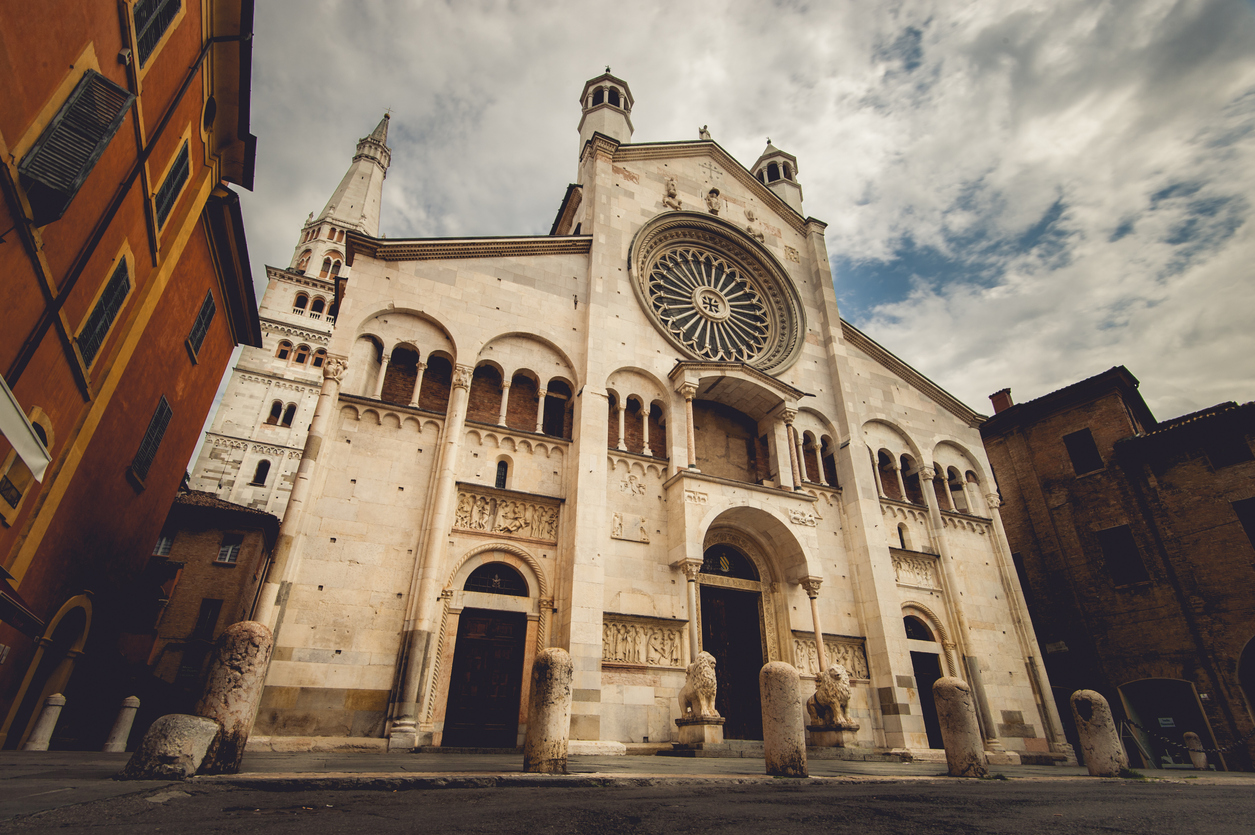 Thirty kilometres north of Bologna is Modena, the birthplace of traditional balsamic vinegar and, some time later, Luciano Pavarotti. It’s a food lover’s paradise, with farmers’ markets bursting with enough gormet cheese, cured meat, pungent seafood and bubbling wines to have anyone salivating.

Here, balsamic vinegar is not a salad dressing – it’s an art form. Don’t miss your chance to visit a traditional factory outside the city centre, where small producers blend barrels of balsamic in their hot attics and the smell of ancient oak and cherry is as pungent as the vinegar. It takes at least twelve years for the grape vinegar to mature, and some of the barrels are so old they are caked in formations of sugar that have eaten through the wood and crystallised into strange blackened sculptures. 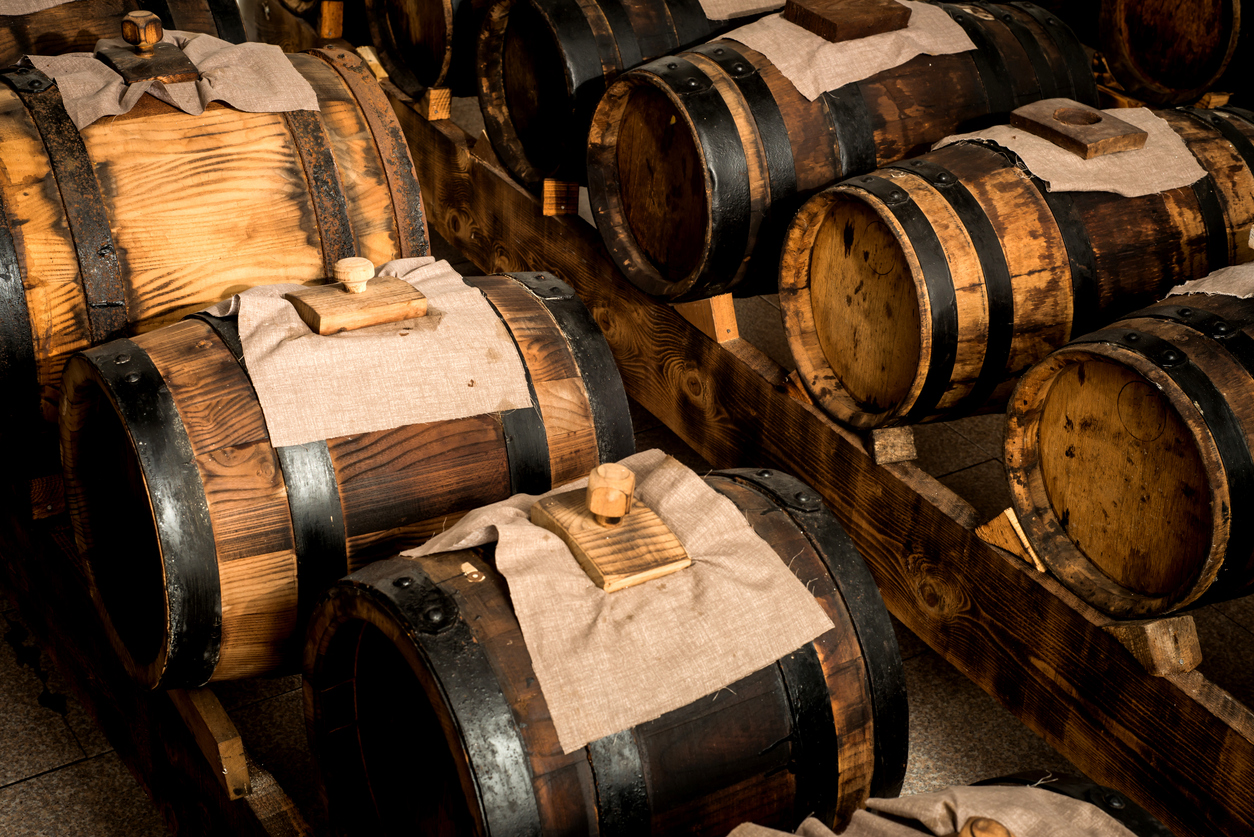 We recommend visiting the stunning Acetaia Villa San Donnino for its impressive collection of barrels, some over 60 years old – they’ll even serve you ice cream with the precious tart sticky brown liquid; it’s fascinatingly delicious! The villa was also a set location for Robert de Niro’s film 1900, with its surreal frescoes, art deco décor and imposing marble staircase.

Visit the 17th century baroque military academy, the golden toned Canal Grande which was once the city’s main canal, the opera house, the Jewish quarter with its synagogue hidden by trees since the fascist regime and the Duomo Cathedral, impressively Romanesque with its gold and silver, paintings, high alter and fascinating medieval carvings. This is also where Pavarotti lay in state for people to pay their respects before being buried just outside the city. In town, you can even visit Pavarotti’s father’s bakery, Panificio.

Oh, and if you’re a formula one fan it would be sacrilege not to visit the Ferrari museum. From the 125 S, the first Ferrari ever built, to the Enzo Ferrari, the only road-going formula one of which only around 400 were ever made, you’ll find it here, with vintage cars, shiny new special editions and more of the most important cars in Ferrari history on display. You can also see many of the actual racing trophies Ferrari have won, as well as original memorabilia surrounding the life of Alfa Romeo Director turned car designer Enzo Ferrari and you can even buy yourself the famous red uniform!

For trendy dining, lunch at the fabulous Caffè Concerto right on the piazza Grande.

For rustic chic, look no further than Green Village on the Via Maestra Bagazzano. There’s more to this cosy eatery than decadently delicious food. They also offer cookery breaks, where you can go to the market to buy the ingredients, learn how to fold and cook authentic handmade pasta (tortellini and tortelloni are Green Village’s specialities), and then have it served to you in a stunning country setting.

Stay at the Hotel Central Park, Viale Vittorio Veneto, for a comfortable, central location. Or for something more charming, head to the gorgeous medieval castle turned hotel and spa Castel Tabiano. Just outside Modena, it offers fabulous luxury and cuisine in a rural setting. 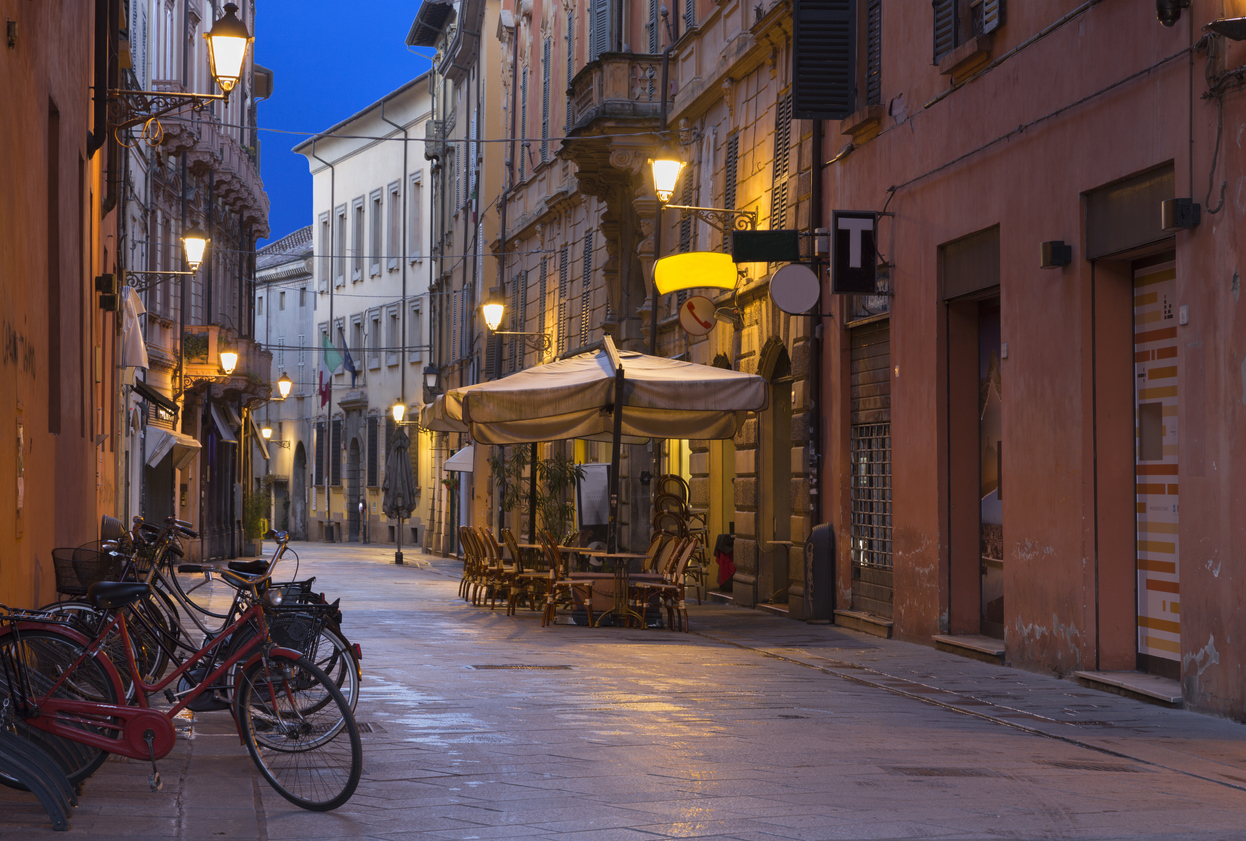 Reggio Emilia – The street of the old town at dusk

Further north still lies the small but vibrant town of Reggio Emilia. In the scenic town centre, the people gossip noisily in the streets, so relaxed that it’s difficult for cars to pass, and the main square, Piazza Prampolini buzzes with stylish locals drinking espresso – and absolutely zero tourists.

You’ll love it for the people, the sunset coloured stately buildings and the ornate neoclassical theatres. Don’t miss the gorgeous cathedral, edged with sculptures of monsters and mermaids, or the Parmegianni Gallery, showcasing the extensive art and costume collection of Luigi Parmegianni.

On the outskirts of the city, you can go on a magical tour of the surrounding castles or visit a farm like Scalabrini’s Dairy Farm to watch how local treasure Parmigiano Reggiano – Parmesan Cheese to you – is produced.

From the huge copper vats where workers break up the curd to the swimming pools of brine to the massive vault where the cheese is aged, you can watch the process that’s been a part of the region for 9 centuries, and taste chunks of the heady, crackly cheese hacked from the wheel.

If you’re self catering, buy a chunk and then head to family-owned La Casalinga for fresh hand made pasta, where they fold tortellini and tortelloni into their delicate shapes so quickly they could be knitting. Or for something more trendy, dine at Enoteca Ristorante Il Pozzo, V.le Allegri, 7.

For sparkling local wine that bears absolutely no resemblance to your idea of Lambrusco, visit to Azienda Agricola Venturini Baldini, via Turati, 42, for a tasting.

Flights to Bologna start at around the £135 mark – economy travelling April onwards. There is reasonable flight coverage to Bologna International airport from around the UK with carriers such as British Airways, EasyJet, Air France and KLM all vying for business. Skyscanner is a useful site for flight availability and price checking.

Previous Story
Is your prostate healthy?
→ 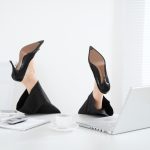