Laurence Green picks through another packed programme of delights to reveal the highlights of this year's EIF and Fringe festivals. 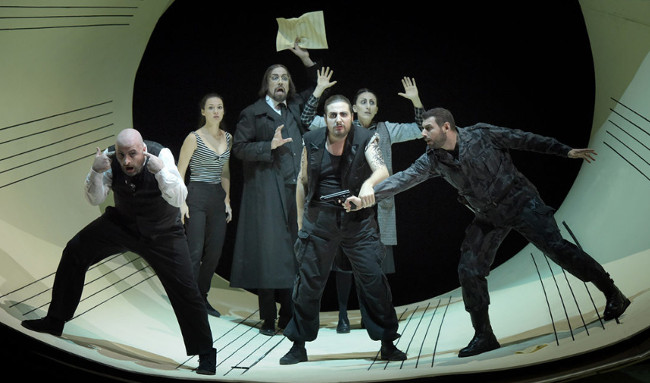 Actors with painted faces reciting Shakespearean sonnets in the street, acrobats performing cartwheels and juggling skittles in front of astonished passers-by, men on stilts handing out flyers for obscure shows and fire-eaters performing dangerous stunts. Yes, you’ve guessed it the 2018 Edinburgh Festival, the largest arts festival in the world is back and in full swing.

The Marriage of Figaro

The most eagerly-awaited event in the International Festival was Laurent Pelly’s production of Rossini’s comic opera The Barber of Seville (Festival Theatre) and it did not disappoint. Dashing young Count Almaviva falls desperately in love with the ravishing Rosina, locked away by her lecherous guardian Dr Bartolo – who has designs on her himself, as soon as she comes of age…

Step in Figaro, Almaviva’s expert barber and Seville’s go-to fixer, with a surefire way for the Count to reach his beloved – even if it means donning a ridiculous disguise.

This is a work in which deceit and deception and trickery and disguise are all excusable in the name of love. It is a feast of frivolous fun, sparkling with wit and energy and propelled along by an array of memorable lines and Pelly’s new production from the Théâtre des Champs-Elysées certainly rises to the occasion. The plot may be wafer thin but Pelly brings a mixture of style and invention to the proceedings. There is no setting as such, merely a stage design made up of giant manuscript paper, a collapsible pop-up music lesson and prison bars configured as musical staves. One of the most visually arresting scenes is when a line of men in black evening suits and white shirts arrive behind the scrolls of music and go on to form a small onstage orchestra. There are also some droll touches: the arrival of soldiers brandishing music stands instead of swords and Rosina’s singing lesson taking place on the score of the very aria she is rehearsing.

This then is a production that fizzes with delight and brings a refreshing immediacy to Rossini’s irresistible comedy.

It was party night at the Usher Hall when the Youth Orchestra of the Americas received a tremendous ovation and brought all the fiery passion of Latin American rhythms to the Scottish capital. This is one of the world’s most remarkable youth ensembles, bringing together the most accomplished young musicians from 18 to 30 from North and South America.

Exuberant Venezuelan pianist Gabriela Montero joined the orchestra giving a virtuoso performance of Tchaikovsky’s beloved First Piano Concerto with its unforgettable melodies which came surging to life in the hands of this true musical maestro.

Mexican conductor Carlos Miguel Prieto completed the programme with the hope, heroism and joyful optimism of Copland’s euphoric Third Symphony, complete with his Fanfare for the Common Man incorporated into its finale. He opened the concert with the scintillating native rhythms of Mexican composer Carlos Chavez’s rousing Sinfonia India. Truly an evening of many pleasures. 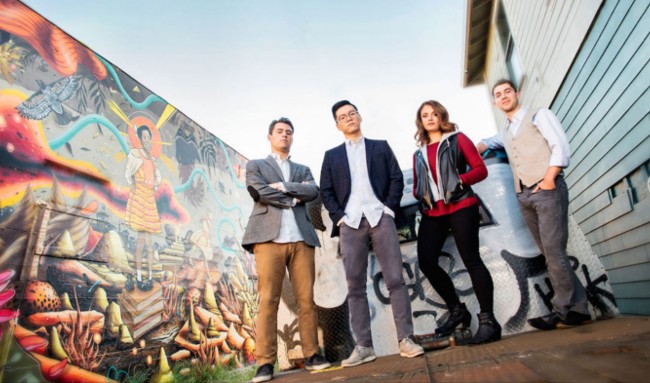 Staying with concerts, I caught up with an impressive morning recital by Philadelphia-based Dover Quartet at the Queen’s Hall. For their International Festival debut, the young string ensemble embarked on an intense emotional journey of surging passions. Following the power and the nobility of Haydn's profound F minor Quartet Op 20 No 5, played with intensity and finesse by the four musicians, they brought together the sonic beauties of Bartok’s folk-inspired Second Quartet, with the turbulent richness of Zemlinsky’s restless Second Quartet. Truly a rich and diverse programme! 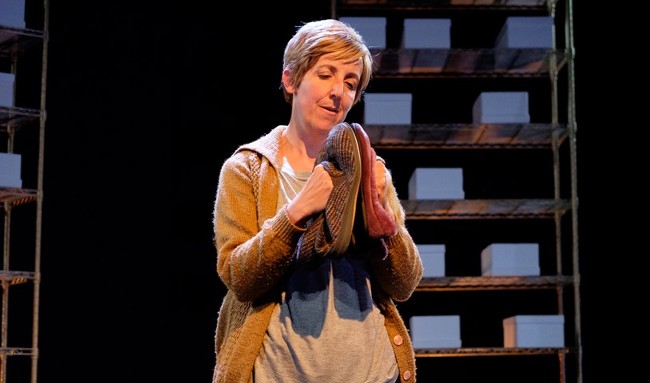 The Greatest Play In The History Of The World

Over to the Fringe and where better to begin than the Traverse Theatre where the best new writing can be found. Let’s begin with Ian Kershaw’s whimsical but charming time-travelling love story The Greatest Play In The History Of The World, directed by Raz Shaw. A man wakes in the middle of the night to discover that the world has stopped. Through the crack in his bedroom curtains, he can see no signs of life at all … other than a light in the house opposite where a woman in an oversized Bowie t-shirt stands, looking back at him. This is an intriguing if rather protracted work, full of exquisite observation and with a superb solo performance by Julie Hesmondhalgh, of Coronation Street and Broadchurch fame.

Mark Thomas is an accomplished performer and raconteur and nowhere are his skills better served than in his topical and hilarious Check Up: Our NHS at 70, directed by Nicholas Kent. Using a familiar mixture of reportage, interviews and storytelling – he spent a month shadowing doctors – this comedian and activist performs with his customary passion. His interviewees range from Frank Dobson, the architect of PFI, which he now says was his greatest regret, to the surgeon carrying out life-changing gastric-sleeve surgery, not forgetting the dementia nurses creating small strategies to help people manage their condition. The material may appear depressing but Thomas makes it seem both witty and enlightening, This is just the tonic for a busy festival!

What Girls Are Made Of

In brief: Orla O’Loughlin’s rowdy and rousing play with music What Girls Are Made Of, in which actor, musician and theatre director Cora Bissett takes audiences back to 1982 to tell the autobiographical story of her rollercoaster journey from Fife schoolgirl to indie rock star 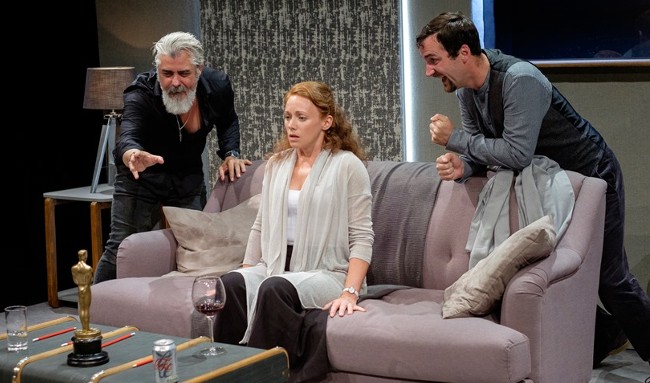 The standout production at the Traverse though is undoubtedly David Ireland’s savagely funny Ulster American, directed by Gareth Nicholls. The story is relatively simple. An English theatre director, Leigh, is sitting in his living room with Oscar-winning American actor Jay waiting for the arrival of a playwright Ruth who has written a play about Northern Ireland in which Jay has been signed to star. From the start the mood is nervous. Jay (brilliantly incarnated by Darrell D’Silva) is a monstrous, vain, egotistical individual with a view on everything, but generally, despite his self-proclaimed pro-feminism and generally right-on-ness, his opinions are as bombastic and repellent as his personality.

It is only when Ruth arrives that full mayhem breaks out since it emerges that Jay has confused Northern Ireland with the South and the part he has agreed to play is one that undermines his romantic notions of his own Catholic background.  Apart from D’Silva, there are impeccable performances by Robert Jack as the weasely, ambitious Leigh and Lucianne McEvoy as Ruth conveying the fierce determination of a writer who sees herself as British not Irish. Exploring consent, abuses of power and the confusion of cultural identity, this is a confrontational, coruscating comedy that deserves a London transfer. 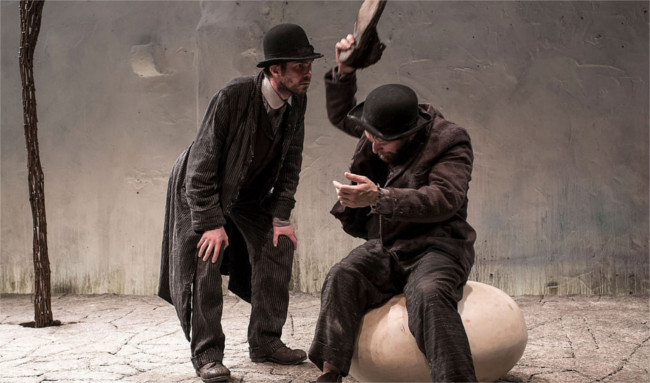 Back to the international festival and the highlight for me was the Druid Theatre Company of Galway’s masterly production of Samuel Beckett’s iconic 1953 play, Waiting For Godot (Lyceum Theatre) directed by Garry Hynes. Two men Estragon and Vladimir wait by the side of the road expecting – or rather hoping – that another man, Godot will keep his appointment with them and perhaps give them support or shelter. They spend the time in conversation about Estragon’s boots and feet, about a passage from the New Testament, about suicide and many other matters. Another odd pair, Pozzo and Lucky - a master with a whip and a slave with a heavy burden – arrive. Pozzo has a picnic of chicken and wine, smokes a pipe and entertains the others with an explanation of the twilight in these latitudes and commands Lucky to dance. Pozzo and Lucky then leave and a messenger arrives to say that Godot will not come this evening but tomorrow night. Night falls, the moon rises but the whereabouts of Godot and what news he might bring remain a mystery and things go from bad to worse.

This is one of Beckett’s funniest and immediate creations but with disturbing undercurrents. It crackles with deadpan wit and linguistic invention as well as offering compelling glimpses into our existential absurdity. Druid’s powerful staging makes it seem like a completely re-invented work for today, bringing together charm and absurdity, high-comedy and touching humanity, reaffirming Beckett’s skill to shock and surprise us.

Hynes extracts first-rate performances from his excellent cast. Marty Rea makes a tall, wiry and self-mocking Vladimir, whilst Aaron Monaghan is a stockier and clown-like Estragon, both of whom give the impression of men in their prime, shaken out of society by poverty, incapacity or social breakdown and surviving their misfortune with whatever good grace they can muster. They are strongly supported by Rory Nolan and Garrett Lombard as the rich man, Pozzo, and his abused servant, the ironically named Lucky.

This then is a stirring, thought-provoking production that gives a classic text a whole new meaning.

Both the International Festival and Fringe Festival run until August 25th