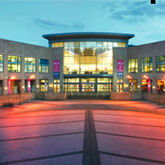 Dance the afternoon away at the Lowry Outlet Mall!

Manchester’s only factory outlet Mall, the Lowry Outlet Mall, dusts off its dancing shoes for the announcement of its new monthly Tea Dance line-up! Take advantage of the Lowry Outlet Mall’s Special Group Days; offering a classic film at the on-site Vue cinema, lunch, a tea dance with Greg Francis and his live band and a free prize draw - all for just £10 per person. What’s more if you book up to two weeks in advance you will receive a massive 20% off, making it just £8 per person.

Upcoming classic films for 2011 include On the Town (June 8), Seven Brides for Seven Brothers (July 13), King’s Speech (September 14) and A Christmas Carol (December 14). Early booking is essential to confirm your place, as these events are selling out fast!

I would love to have joined this party! It's a chance to unwind and meet fun people. Since I have been house-bound more months now, I miss attending social events in my community. I need to work and I found this great website https://www.bestdissertations.com/dissertation-help.php that accepts freelancers. Though I stay in my house most of the time, I can still earn money without going out of the house.

Online HYIP?
Online HYIPs rarely offer information to their monetary experts of how is dealt with their money. This makes it straightforward for bogus undertakings to succeed. Shady facilitators can set up a site to look like the other HYIPs open on the net, believe that theorists will place their money in their grip and a short time later stop the activity and leave with the cash.
Ponzi is a beguiling procedure which capacities as a pyramid. In such plans, advantage isn't made by compelling money related hypothesis, yet by connecting new examiners and using their endeavor money to pay existing people. This is all very well and incredible while the system has a consistent progression of new people placing into it yet once a moderate period is hit, the theories will stop coming in and the whole structure will fall. Sometimes the structure organizers don't hold on until this has happened and may essentially stop what they are doing and keep the money which had been contributed. Every now and again the monetary experts don't get aware of this until they quit getting their favorable position portions as ensured.
There are different ways to deal with recognize a Ponzi plot from an authentic HYIP - check hyip programs here. At first, be cautious about plans that offer a high step by step rate return. If a site offers you 40% consistently on your theory, you should address where the backings will come from to make that level of portion. Plus, regardless of the way that HYIPs as often as possible compensation you for insinuating others to their arrangements, these portions are routinely low. If you are offered 10% per reference it justifies considering if that may be because references are the lone course for the structure to forge ahead. At last, look at the site and its arrangement and convenience. If you perceive a huge load of substance that seems as though it has been recently imitated from another site, or if the arrangement and organization is particularly unrefined, it could well be that the facilitators understand that it won't be needed for long as the structure is simply something flashing to make them money.
There are people who put assets into Ponzis deliberately. This is since, in such a case that you are enough blessed to contribute and pull out from the plans before they breakdown or quit working, you can make more noteworthy returns than through the authentic HYIPs. Regardless, you ought to recollect that it is so normal to lose all that you contributed with these systems. You may think you understand when to leave these ventures yet in truth, it is regularly karma rather than skill which outfits examiners with a profit by these plans. Routinely the organizers of these plans invite their allies to take an interest so when they get the advantages, simply the people they select to share them will benefit.
You may decide to face a challenge and endeavor to play the pyramid system for your own advantage. It justifies reviewing, in any case, that in case you do this whether or not you, at the end of the day, make an advantage, it will be to the disadvantage of others. Moreover, these systems are unlawful and the facilitators of them face genuine authentic disciplines if they are found working them.
Source: https://www.hyip.biz/

There are no media for this group