An affectionate tribute is paid to one of the greatest comedy double act that Britain has ever seen in Owen Lewis’s production of Eric and Little Ern at the Vaudeville Theatre. 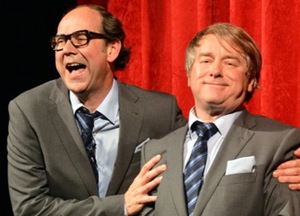 We begin in 1999 and Ernie Wise is in hospital following a heart attack when a white-coated doctor comes in and puts a pair of glasses to read the patient’s notes. Only this is no doctor – it is Eric Morecambe. But Morecambe has been dead for 15 years after collapsing on stage during a charity gig. He has now come to collect his old friend, reminisce about the past and take him to that great stage in the sky for one last performance.

It is bold – or rather foolhardy – for Jonty Stephens and Ian Ashpitel as Eric and Ernie respectively to recreate their performances. But, apart from bearing a striking resemblance to Eric and Ernie, both actors manage to capture their mannerisms and facial expressions to a tee and perform the routines with comic panache. They also recreated the close rapport the duo had with audiences. Eric and Ernie’s success was built upon the fact that when you switched on your television you felt as if you were inviting a couple of friends into your home.

The show draws heavily on the original scripts by Eddie Braben, Dick Hills and Sid Green and the humour seems just as funny today as in Eric and Ernie’s original television broadcasts. In one comic gem od a scene Eric sits at the piano playing Grieg’s piano concerto badly, to which Ernie interjects “Why are you playing the piece with all the wrong notes?” Eric replies: “I am playing all the right notes but in the wrong order!”

In another witty sketch, Eric asks Ernie “Where would you be without me?” “I’d be a comedian!”replies Ernie. It is an exchange which goes to the heart of this great comedy partnership whose television audiences reached 28 million when they performed their 1977 Christmas Special.

The Show manages to be poignant as well as funny. Ashpitle’s Ernie movingly describes how angry he felt when Eric died, bringing to an end a partnership which lasted more than 40 years and the irreplaceable loss of a long time friend.

And when the pair finally sung the duo’s trademark song Bring Me Sunshine, it sets off a glow in our hearts all over again and we can reflect on the fact that these were two iconic comedians who could reduce us to stitches of laughter without for one minute being crude or vulgar. 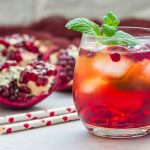