Fancy seeing a show that will literally blow your mind? Then head straight for theatre company 1927’s visually stunning production The Golem (Young Vic Theatre), which combines animation, film music and live performance in a superb satire on our obsession with technology.

This dystopian fable centres on Robert Robertson, a lonely socially-awkward chap who languishes in a dead-end, pencil-pushing job, until the day an inventor pal sells him “a man of clay who can only obey”. The Golem, as it is called, is initially a large, lovable, naked clay hunk – who appears only in projected form – providing a convenient solution to everyone’s problem and has an unexpected penchant for Benedict Cumberbatch. Why go to work when Golem can do it for you? Why cook, clean or shop when Golem is more efficient? However a technology upgrade gives him a mind and voice of his own and this simple labour-saving device takes on a sinister authority and autonomy.

Director and writer Suzanne Andrade and filmmaker, animator and designer Paul Barritt have drawn loosely on the Golem myth. This is the Jewish folklore that suggested it was possible to transform a mound of clay into an animate slave-man and in most “accounts” the creature breaks free of his master’s control and turns monstrous. But there is nothing frightening here. Instead this witty, thought-provoking show takes a direct swipe at the iPad generation and machines’ increasing dominance over man in a society so heavily dependent on consumerism and mass technology, raising questions of freedom and individual choice, fashion, family and identity.

The company of five – Esme Appleton, Rose Robinson, Shamira Turner, Will Close and Lillian Henley succeed in bringing the human protagonists vividly to life and make these flesh-and-blood characters truly endearing. Furthermore the precision with which the actors synchronise with the animation is most impressive.

It has taken four years to bring this ground-breaking show to fruition and it should delight anyone of any age capable of being enslaved by a gadget. Certainly The Golem makes us feel as if we’re looking at the world anew rather than having our knuckle rapped. An unusual and unmissable festive treat! 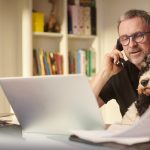