Katherine Parkinson shines in this satire on the disenchantment of modern life. Laurence Green reviews Shoe Lady at the Royal Court Theatre.

It is always a pleasure to see one of our most versatile actresses Katherine Parkinson back in the theatre–her last London stage appearance was in Home I’m Darling which transferred from the National to the West End–in a role she makes her own–that of a woman whose life spirals out of control after she loses a shoe in EV Crowe’s quirky, whimsical drama Shoe Lady (Royal Court Theatre), directed by Vicky Featherstone.

Parkinson plays Viv, an estate agent, wife and mother, who, after losing her much cherished shoe, stumbles on, her bare foot growing increasingly bloody, as she tries to hold herself and the world together. Even in her single-shoed state she still has to go to work–there’s no possibility of stopping. So she shreds her sole as she shows young couples around smart apartments, while eyeing up their high heels. In becoming un-shoed she becomes increasingly agitated.

This 65-minute play shows how even reluctantly comfortable lives can be pressurised and precarious, that is only compounded by parenthood, how even if you’re  middle class, your life isn’t free from uncertainty and anxiety.

Although insubstantial, the play has touches of magic–Viv is caressed by her curtains and there is a musical sequence in which everyone sings about carousels. But in other ways the piece is less sure-footed–the dialogue is written in choppy, sing-song phrases and there are jerky changes of tone and pace.

Chloe Lamford’s impressive set emphasises the narrowness of perspective. On either side there are two pits, reinforcing the sense of potential calamity, but also Viv’s blinkered predicament as she totters on a moving walkway, or tries to cram her red, seeping foot into a new shoe.

What makes the play really worthwhile is Parkinson’s magnetic performance, see-sawing between distress and cheeriness and combining a perky practicality with an underlying sadness. She is dogged in her plodding, maintaining a strained smile and conveying the release Viv derives from the breeze blowing through a toilet window.

Though it contains interjections from other characters, this is basically a monologue, with other people pushed to the sidelines. Tom Kanji is entirely silent as her husband Kenny but gets a few lines in his secondary role as a pair of collapsing curtains. Kayla Meikle plays a cider-swigging homeless woman who has lost the opposite shoe to Viv and is there just to illustrate how far and fast she has fallen. A troupe of slavish stage managers are on hand to refasten Viv’s lone show and stain her other foot with gore as she hobbles through vicious, contemporary London.

This, in short is Parkinson’s show, and she certainly shines in Crowe’s satire on the disenchantment of modern life. 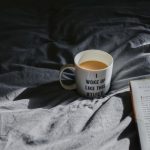 Next Story
Trouble sleeping? There’s a fine art to it…