As a keen yachtsman, one of Derek Thomerson’s favourite stories was of a perilous trip from France to England in 1984. 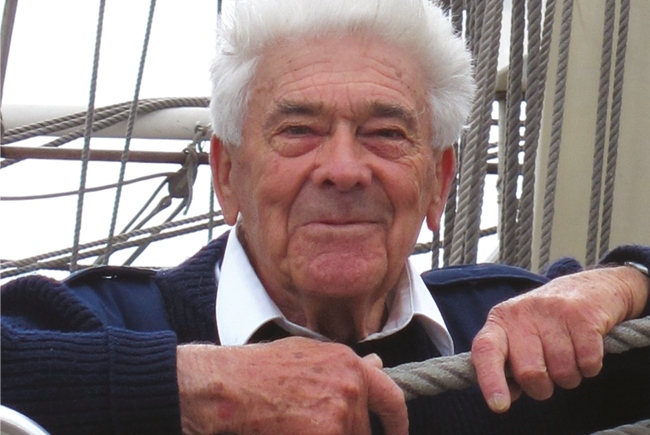 His daughter Viv says: ‘He used to recount his journey very dramatically with a twinkle in his eye.’ Derek was with his friend Bob, on the yacht Engel, without a full mast, when the wind whipped up to force 7. ‘DISASTER’ wrote Derek in his log, as the yacht’s engine ‘suddenly increased in revs and then cut out’ at 9.15pm.

Four and a half hours later, when a passing ship attempted to help, things went from bad to worse. ‘Unable to stop Engel approaching bow of tanker. Just as we were under the 5-ton anchor, a wave lifted us, and Bob and I threw ourselves backwards to escape instant death. The anchor crashed through the cabin roof.’

Thankfully, at 3.45am, Selsey lifeboat crew came to the rescue. They set up a tow and, after 4 hours, all were safely back on dry land. Derek remembered the crew’s ‘extreme proficiency’ adding that they were all ‘jolly chaps’. After this 10-hour ordeal, Derek never forgot the lifeboats and, after providing for four daughters, Derek left the RNLI a gift in his Will.

Derek’s daughters wanted their local lifeboat station at Calshot to benefit from their dad’s generosity. A plaque in the boathouse recognises the gift in his Will, which contributed towards the station’s running costs in 2018.

Leaving a gift in your Will to the RNLI is easy to do. It means that other crews and lifeguards will have the kit and training they need to save lives, like Selsey crew did that day.

Find out how to write or update your Will, or request our free Gifts in Wills guide here