‘After 24 years on a lifeboat crew, you have many memorable rescues. I’d like to share one with you. But it doesn’t involve treacherous seas or high winds. It involves our family. Our children.' 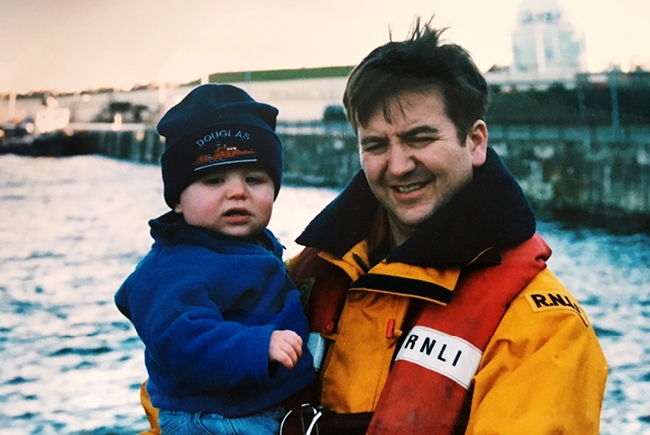 ‘It was March 2018. And the call came just before midnight. My son Philip and I leapt from our beds and headed straight for the station to launch Douglas’s all-weather lifeboat, Sir William Hillary. We were joined by two more lifeboat families: Peter Washington and his daughter Lavinia, and Tony Radcliffe and his son Robert.

‘We’d been tasked to search for a missing person. We launched and were quickly on scene to illuminate the cliff base for the Coastguard helicopter flying overhead. The helicopter crew spotted the casualty at the foot of the cliffs, and we launched our smaller inflatable craft from the big boat – to get us get closer to the shore and administer first aid if we needed to.

‘Lavinia volunteered to row the inflatable – I went with her as second crew member. When Peter, Lavinia’s dad, saw her climb over the rails to this little craft, he must have thought: ‘What have I done?’ She was just 19 years old and he didn’t know what she was going to see. All we knew was that the casualty had fallen off the cliffs. His unease would have only lasted for a split second. Our training and equipment are second-to-none, and we’re confident in each other’s abilities.

‘On reaching the shore we agreed the best course of action was to help the Coastguard to recover the person back up the cliffs. Once the casualty was safe, Lavinia and I returned to the lifeboat. This was the first time all three families have had a shout together.

‘I have such confidence in the whole crew because we have the kit and training we need to save lives at sea. That’s thanks to public support, including gifts left to the RNLI in Wills. I think it’s incredible that your legacy can live on and help save lives in the future. I know that after I retire, the next generation of volunteers like Philip, Lavinia and Robert will be there to continue our legacy.

‘Gifts in Wills help them continue this lifesaving work. So no matter how large or small, I hope you will consider leaving a gift to the RNLI in your Will. Your kindness will make such a difference.

Find out how to write or update your Will, or request our free Gifts in Wills guide here.