Where kit comes into its own

Gifts in Wills help provide the craft and equipment that crew members like Robert rely on to save lives. 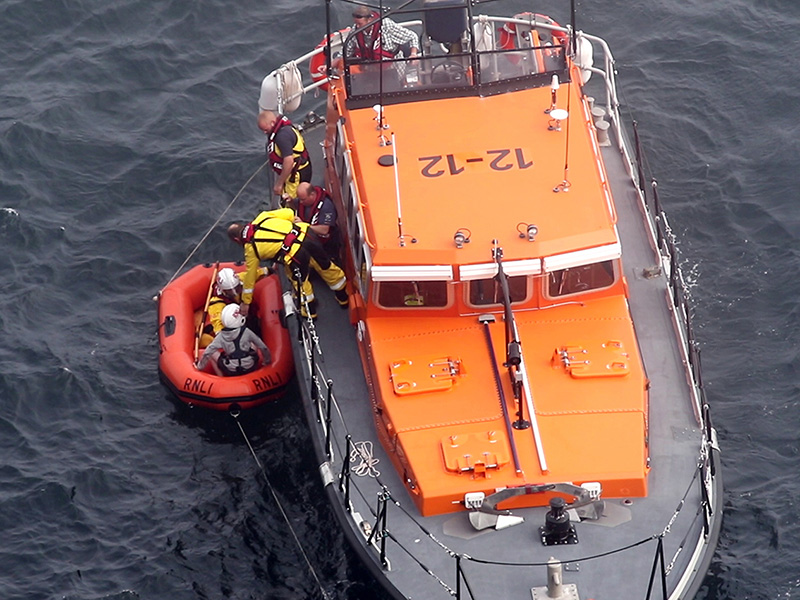 The three lads became stuck in an area where drops of 200-300 feet plunge into the Irish Sea below. Unable to go either up or down, one of the boys made the sensible decision to call for help.

‘When we turned up at the station all we knew was that there were kids on the rocks,’ recalls Robert. ‘Instantly, you know you’ll need to get into your drysuit, have the first aid kit ready, and take safety gear, helmets and survival lifejackets for the casualties.’

Douglas crew swiftly launched to the scene and Coxswain Tony Radcliffe manoeuvred their all-weather lifeboat, Marine Engineer, close to the rocks. After conferring with the Coastguard, we decided to lower two of the children down to the lifeboat and the other back to the top.

Robert, along with fellow Crew Member Michael ‘Stormy’ Kaighen were tasked with taking the lifeboat’s daughter boat, an inflatable dinghy, toward the rock face. ‘We’ve done work around the cliffs before but this was the first time we’d had people in that particular area,’ says Robert. ‘A bit of a flat rock was showing just underneath the water, so we made the decision to make that our point of entry.’

Securing the dinghy required Stormy to take a heaving line up the slick rock. ‘This is where kit comes into its own,’ explains Robert. ‘The wellies were important because not only were we standing in water, but with rocks this slippery, grip is everything.

‘And training definitely came in handy too. Navigating to the rocks, carrying the boys down one by one, and then towing them out to the lifeboat using a breeches buoy – similar to a zipline. The more you train, the more you have to call on when you need it. At the end of the day, it was a job well done.’

Considering the danger the boys were in, they had a lucky escape.

Gifts in Wills provide the training and protective gear that crew members like Robert, Tony and Stormy rely on to save lives. After you’ve looked after your family and friends, please consider leaving a gift in your Will to the RNLI.