"Heart disease is so universal and because of what happened with my mother, British Heart Foundation was the obvious choice." Melvyn Sanett 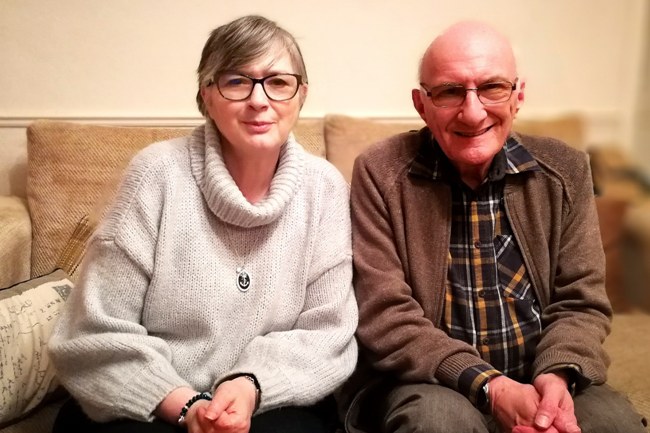 Lillian Sanett lived the dream of many UK retirees when she set up home in Majorca. She lived there happily until her unexpected death from a heart condition. Here, her son Melvyn and daughter-in-law Linda explain why they are leaving gifts in their Wills to support pioneering work into heart disease commissioned by British Heart Foundation (BHF).

"My mother-in-law, Lillian had gone to live in Majorca and we decided we would go too," explains Linda. "We went out in about September 1988 and opened a shop.

"Lillian used to get palpitations. She’d been to the doctor in Majorca about it several times and when she also became more breathless her doctor suggested she go to Barcelona for some tests. That was the end of January. I remember because we had all sorts of cards and gifts in the shop for Valentine’s day.

"We had a call to say it wasn’t good news, that she’d need a valve replacement and a bypass. Then something went wrong and she had an abnormal heart rhythm and that caused a cardiac arrest. She’d only gone in for tests, not a major operation. But that was it.

"She was with us the night before. The boys were playing as she was going and I remember calling them to come and say goodbye and she brushed it off saying she’d seen them when she got back.

"Melvyn rushed over to bring her back to Majorca. We’re Jewish, so she’s buried in a Jewish cemetery in Majorca.

"She was so happy that we were with her in Majorca. She was an angel of a lady. Not many people say that about their mother-in-law! But I miss her as much as anybody else."

Lillian's passing is not the only time that a heart condition has touched the lives of the Sanetts. Melvyn’s father had a stroke (not fatal) and Alzheimer’s, and Melvyn and Linda's daughter-in-law, Corinna’s father died in 2005 from a heart attack in his mid-50s.

The impact of seeing people close to them affected by heart conditions made Linda and Melvyn determined to do something positive for future generations.

Including BHF in our Will

"When my husband and I were making our Will, the solicitor asked if we wanted to give something to charity," explains Linda. "He showed us some options that included BHF and because of what happened with Lillian and Corinna’s father, it was a nice thing to do to include a donation to BHF."

"I hope it goes towards research so people don’t end up like Lillian. We need to know more about what goes on inside our hearts. We have been touched ourselves by heart disease in such a sad way, if our money can help other families avoid the same heart ache, that would be something," she concluded.

"We’re planning a visit to the cemetery next year (2019) as that will be the 30th anniversary of her death," offers Melvyn. "Heart disease is so universal and because of what happened with my mother, British Heart Foundation was the obvious choice."

Celebrate your life by helping others

Legacy gifts come from ordinary people, and they are crucial to funding life saving research. It's so easy to leave a gift in your Will. By remembering the BHF in your Will with a share of what remains, after family and friends have been looked after, you can help create the next medical advances. What better way to thank the people and causes that have had an impact on your life, than to make a contribution through a gift in your Will?